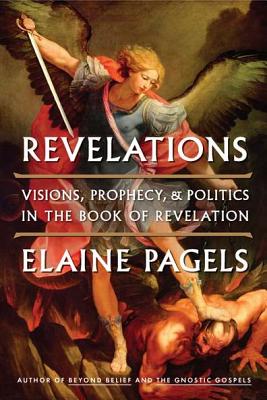 A startling exploration of the history of the most controversial book of the Bible, by the bestselling author of "Beyond Belief."

Through the bestselling books of Elaine Pagels, thousands of readers have come to know and treasure the suppressed biblical texts known as the Gnostic Gospels. As one of the world's foremost religion scholars, she has been a pioneer in interpreting these books and illuminating their place in the early history of Christianity. Her new book, however, tackles a text that is firmly, dramatically within the New Testament canon: The Book of Revelation, the surreal apocalyptic vision of the end of the world . . . or is it?

In this startling and timely book, Pagels returns The Book of Revelation to its historical origin, written as its author John of Patmos took aim at the Roman Empire after what is now known as "the Jewish War," in 66 CE. Militant Jews in Jerusalem, fired with religious fervor, waged an all-out war against Rome's occupation of Judea and their defeat resulted in the desecration of Jerusalem and its Great Temple. Pagels persuasively interprets Revelation as a scathing attack on the decadence of Rome. Soon after, however, a new sect known as "Christians" seized on John's text as a weapon against heresy and infidels of all kinds-Jews, even Christians who dissented from their increasingly rigid doctrines and hierarchies.

In a time when global religious violence surges, Revelations explores how often those in power throughout history have sought to force "God's enemies" to submit or be killed. It is sure to appeal to Pagels's committed readers and bring her a whole new audience who want to understand the roots of dissent, violence, and division in the world's religions, and to appreciate the lasting appeal of this extraordinary text.

Elaine Pagels is the Harrington Spear Paine Professor of Religion at Princeton University and the author of "Reading Judas, The Gnostic Gospels"-winner of the National Book Critics Circle Award and the National Book Award- and the "New York Times" bestseller "Beyond Belief." She lives in Princeton, New Jersey.