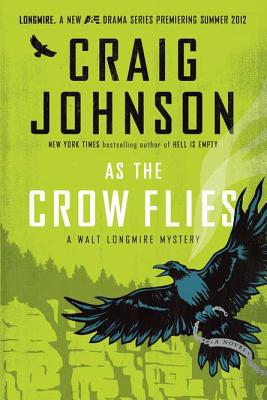 As the Crow Flies

“Walt Longmire and Henry Standing Bear try to balance wedding planning for Walt's daughter with solving the murder of a woman whose body they find at a potential ceremony location. Add in a troublesome new tribal chief, and Walt is in over his head. Another wonderful addition to this amazing series! Johnson balances humor, action, and mystery like a master!”
— Anne Kimbol, Murder By The Book, Houston, TX
View the List

The eighth novel from the"New York Times"bestselling author of the Longmire series, the basis for"LONGMIRE," the hit Netflix original series
Embarking on his eighth adventure, Wyoming Sheriff Walt Longmire doesn't have time for cowboys and criminals. His daughter, Cady, is getting married in two weeks, and the wedding locale arrangements have just gone up in smoke signals. Fearing Cady's wrath, Walt and his old friend Henry Standing Bear set out for the Cheyenne Reservation to find a new site for the nuptials. But their expedition ends in horror as they witness a young Crow woman plummeting from Painted Warrior's majestic cliffs. Is it a suicide, or something more sinister? It's not Walt's turf, but he's coerced into the investigation by Lolo Long, the beautiful new tribal police chief.


Praise For As the Crow Flies…

“Walt continues to be excellent company because he’s always keen to learn something from the strong Indian characters in this series…This time a wizened old medicine woman takes Walt in hand, guiding him through a Native American Church peyote ceremony deep in the woods…he [has] a vision that expands his mind and helps him solve the case.”—Marilyn Stasio, The New York Times Book Review

“The pleasure of the series rests in Walt’s narration, with its laid-back, observant, bemused recounting of events…Solid landscapes, a mélange of fully fleshed characters (familiar and new), drily laconic dialogue and assorted power struggles—including Walt’s endless war with Rezdawg, Henry’s recalcitrant, falling-apart truck—keep the latest in this rich and satisfying series on engaging course.”—Houston Chronicle

“Walt’s voice lets readers in on his gentle and wry nature, while showcasing his devotion to bringing bad guys or gals to justice…Johnson enriches his narrative by using the setting itself as another well-developed character. Johnson’s Northern Cheyenne characters defy stereotype with self-depreciating humor and strength. Chief Lolo Long and Tribal Chief Lonnie Little Bird are especially well-crafted and appealing.”—The Denver Post

“All the elements his fans love are present: lively characters, easy banter, and, of course, a touch of the supernatural. In early books, Walt was less sure of himself, but, in his eighth adventure, it makes sense that he’s now the one “giving sheriff lessons.” This book fits the hand like a well-worn glove.”—Booklist

“A top-notch tale of complex emotions and misguided treachery… Crow is a superb novel steeped in the culture of the American West.”—USA Today

Craig Johnson is the author of eight novels in the Walt Longmire mystery series, which has garnered popular and critical acclaim. "The Cold Dish "was a Dilys Award finalist and the French edition won Le Prix du Polar Nouvel Observateur/Bibliobs. "Death Without Company," the Wyoming Historical Association s Book of the Year, won France s Le Prix 813, and "Kindness Goes Unpunished," the third in the series, has also been published in France. "Another Man s Moccasins" was the Western Writers of America s Spur Award Winner and the Mountains & Plains Book of the Year, and "The Dark Horse," the fifth in the series, was a "Publishers Weekly "Best Book of the Year. "Junkyard Dogs "won The Watson Award for a mystery novel with the best sidekick and "Hell Is Empty "as well as "As the Crow Flies "(the eighth in the series) were "New York Times "bestsellers. All are available from Penguin. Craig Johnson s Walt Longmire novels have now been adapted for television in the hit series "Longmire "on A&E. Johnson lives in Ucross, Wyoming, population twenty-five."
Loading...
or
Not Currently Available for Direct Purchase