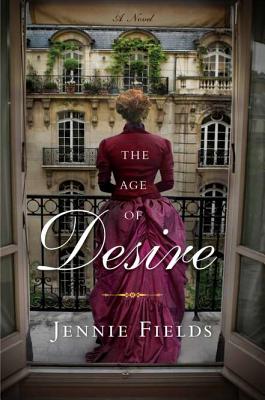 The Age of Desire

For fans of "The Paris Wife," a sparkling glimpse into the life of Edith Wharton and the scandalous love affair that threatened her closest friendship

They say behind every great man is a woman. Behind Edith Wharton, there was Anna Bahlmann her governess turned literary secretary, and her mothering, nurturing friend.

When at the age of forty-five, Edith falls passionately in love with a dashing younger journalist, Morton Fullerton, and is at last opened to the world of the sensual, it threatens everything certain in her life but especially her abiding friendship with Anna. As Edith's marriage crumbles and Anna's disapproval threatens to shatter their lifelong bond, the women must face the fragility at the heart of all friendships.

Told through the points of view of both women, "The Age of Desire" takes us on a vivid journey through Wharton's early Gilded Age world: Paris with its glamorous literary salons and dark secret cafes, the Whartons elegant house in Lenox, Massachusetts, and Henry James's manse in Rye, England.

Edith's real letters and intimate diary entries are woven throughout the book. "The Age of Desire" brings to life one of literature's most beloved writers, whose own story was as complex and nuanced as that of any of the heroines she created.


Praise For The Age of Desire…

“A fascinating insight into the life of my favorite novelist. Fields brings a secret side of Wharton to life, and shows us a woman whose elegant façade concealed a turbulent sensuality.”—Daisy Goodwin, author of The American Heiress

“With astonishing tenderness and immediacy, The Age of Desire portrays the interwoven lives of Edith Wharton and Anna Bahlmann, her governess, secretary, and close friend.  By focusing on these two women from vastly different backgrounds, Jennie Fields miraculously illuminates an entire era. . . . I gained insight into both Wharton’s monumental work and her personal struggles—and I was filled with regret that I’d finished reading so soon.”—Lauren Belfer, author of City of Light and A Fierce Radiance


“[Fields’] portrayal of Edith Wharton in love is imaginative and bold and offers a touching view of Wharton. . . . Fields immerses us in Wharton’s household, her social milieu, and her most private self.”—Irene Goldman-Price, editor of My Dear Governess: The Letters of Edith Wharton to Anna Bahlmann

“In the vein of Loving Frank or The Paris Wife, Jennie Fields has created a page-turning period piece. Fields portrays a woman whose life was hardly innocence and mirth, but passionate, complex, and more mysterious than one might ever imagine.”—Mary Morris, author of Nothing to Declare and Revenge

“Somewhere between the repressiveness of Edith Wharton’s early-20th-century Age of Innocence and our own libertine Shades of Grey era lies the absorbingly sensuous world of Jennie Fields’s The Age of Desire . . . along with the overheated romance and the middle-age passion it so accurately describes, The Age of Desire also offers something simpler and quieter: a tribute to the enduring power of female friendship.”
—Boston Globe

“Fields supplements the story with fascinating excerpts from Wharton’s actual letters and includes appearances by other authors of the period . . . to re-create the exciting literary landscape of Paris and New York in the first decade of the 20th century. . . . the novel should . . . appeal to those who enjoyed Paula McLain’s The Paris Wife.”—Library Journal

“One doesn’t have to be an Edith Wharton fan to luxuriate in the Wharton-esque plotting and prose Fields so elegantly conjures.”—Kirkus

“Delicate and imaginative . . . Fields’s love and respect for all her characters and her care in telling their stories shines through."
—Publishers Weekly

Inspired by Wharton’s letters, The Age of Desire is by turns sensuous . . . and sweetly melancholy.  It’s also a moving examination of a friendship between two women.
—Bookpage

“Fields bases her perceptive novel on Wharton’s own diaries and letters. . . . [THE AGE OF DESIRE] sheds welcome light on the little-known private life of a famous woman and her closest relationships in early-twentieth-century Europe and America.”—Booklist

Jennie Fields received an MA in creative writing from the University of Iowa Writers Workshop and is the author of the novels "Lily Beach," "Crossing Brooklyn Ferry," and "The Middle Ages." An Illinois native, she spent twenty-five years as an advertising creative director in New York and currently lives with her husband in Nashville, Tennessee."