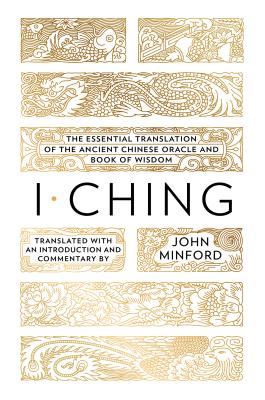 The award-winning new translation of the ancient Chinese oracle and book of wisdom, by the acclaimed translator of the Tao Te Ching and The Art of War

Pose a question, then toss three coins (or cast your yarrow stalks) to access the time-honored wisdom of the I Ching.

The I Ching, or Book of Change, has been consulted through the ages, in both China and the West, for answers to fundamental questions about the world and our place in it. The oldest extant book of divination, it dates back three thousand years to ancient shamanistic practices involving the ritual preparation of the shoulder bones of oxen. From this early form of communication with the other world, it has become the Chinese spiritual book par excellence. An influence on such cultural icons as Bob Dylan, John Cage, Merce Cunningham, Philip K. Dick, and Philip Pullman, the I Ching is turned to by millions around the world for insights on spiritual growth, business, medicine, genetics, game theory, strategic thinking, and leadership, and of course for the window it opens on China.

This new translation, over a decade in the making, is informed by the latest archaeological discoveries and features a gorgeously rendered codex of divination signs—the I Ching’s sixty-four Tarot-like hexagrams. It captures the majesty and mystery of this legendary work and charts an illuminating path to self-knowledge.

Praise For I Ching: The Essential Translation of the Ancient Chinese Oracle and Book of Wisdom…

“A tour de force of erudition.” —The New York Review of Books

“Minford’s new translation is impressive and unique. . . . [It] artfully conveys . . . the runic quality of the original. . . . The erudition and scholarship are truly impressive. . . . The translations . . . are excellent. . . . Anyone with a special interest in the Yi or a general interest in Chinese culture will find a great deal of value in it. . . . The price is certainly unbeatable.” —Dao: A Journal of Comparative Philosophy

“A nicely produced book with an enthusiastic spirit and scholarly credentials . . . [It] has a freshness and clarity about it and reads well [and] has the authority of a solid translator with great scholarly experience. [It] should certainly join the small handful of books that are worthy of consulting time and time again.” —Yijing Dao

“[This] new translation . . . explores the multi-dimensional aspects of this legendary yet largely elusive work in various ways aimed at personalising it and making it more accessible to the English-speaking world.” —South China Morning Post

“Minford’s volume bids fair to become the definitive translation of this primary Chinese classic. An imposing example of the translator-scholar as cultural intermediary, it is both a tour de force of scholarship and a distinguished literary achievement.” —Judges' citation, AAH Medal for Excellence in Translation

“Consistently eloquent and erudite, this rendition of the I Ching will endure as a classic of the twenty-first century and beyond.” —Anthony C. Yu, Carl Darling Buck Distinguished Service Professor Emeritus in Humanities, University of Chicago

“Readers familiar with the classic Wilhelm/Baynes translation can rest assured that John Minford’s new version has surpassed it. . . . It is a work of art. But it is also extremely user-friendly, especially for general readers who wish to consult their fortunes with this book. They will find here, in Minford’s many-splendored prose, a largesse of wisdom and sheer mystical power.” —Leo Ou-fan Lee, Sin Wai Kin Professor of Chinese Culture, Chinese University of Hong Kong

“A creative masterpiece in itself, this translation by John Minford—one of the foremost cultural intermediaries of our day—throws fresh light on the great Chinese classic of the occult. It is a kind of unholy resurrection, a cable that disappears into the abyss of a darker time. In it the Bronze Age predicts to the Information Age the shadow of what is to come.” —Timothy Mo, three-time finalist for the Booker Prize

John Minford is the translator of the acclaimed Viking Penguin edition of The Art of War and a professor of Chinese at the Australian National University in Canberra, Australia.
Loading...
or support indie stores by buying on