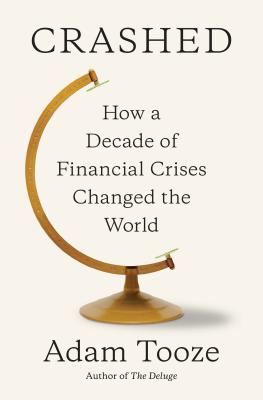 How a Decade of Financial Crises Changed the World

"An intelligent explanation of the mechanisms that produced the crisis and the response to it...One of the great strengths of Tooze's book is to demonstrate the deeply intertwined nature of the European and American financial systems."--The New York Times Book Review

From a prizewinning economic historian, an eye-opening reinterpretation of the 2008 economic crisis (and its ten-year aftermath) as a global event that directly led to the shockwaves being felt around the world today.

We live in a world where dramatic shifts in the domestic and global economy command the headlines, from rollbacks in US banking regulations to tariffs that may ignite international trade wars. But current events have deep roots, and the key to navigating today’s roiling policies lies in the events that started it all—the 2008 economic crisis and its aftermath. Despite initial attempts to downplay the crisis as a local incident, what happened on Wall Street beginning in 2008 was, in fact, a dramatic caesura of global significance that spiraled around the world, from the financial markets of the UK and Europe to the factories and dockyards of Asia, the Middle East, and Latin America, forcing a rearrangement of global governance. With a historian’s eye for detail, connection, and consequence, Adam Tooze brings the story right up to today’s negotiations, actions, and threats—a much-needed perspective on a global catastrophe and its long-term consequences.

Praise For Crashed: How a Decade of Financial Crises Changed the World…

"There have been hundreds of illuminating books on the great financial collapse. Crashed, written to mark its tenth anniversary, will stand for a long time as the authoritative account. In his masterful narrative, the economic historian Adam Tooze achieves several things that no other single author has quite accomplished. Tooze has managed to explain a hugely complex global crisis in its multiple dimensions, and his book combines cogent analysis with a fascinating history of the political and economic particulars."—The New York Review of Books

"An intelligent explanation of the mechanisms that produced the crisis and the response to it...One of the great strengths of Tooze's book is to demonstrate the deeply intertwined nature of the European and American financial systems."—The New York Times Book Review

"An impressive narrative history, weaving together events from around the world with a light touch and a great deal of helpful explanation. Sometimes it feels like Tooze has read every official working paper, memoir and substantive news article on macroeconomics and finance over the past decade. Even for readers who have attempted to follow the twists and turns of events, Tooze adds significant value."—The Washington Post

"The most substantial and insightful account yet written of the financial crisis and it will be required reading for financial policy-makers for years to come."—Times Literary Supplement

“[A] monumental narrative history of 10 years that have reshaped our world...Crashed gives readers a detailed and superbly researched account of the origins and consequences of the wave of financial crises that emanated from the core of the global financial system from 2007. The prose is clear. The scholarship remarkable. Even people who have followed this story closely will learn a great deal.”—Martin Wolf, The Financial Times

"Brexit, Trump, Russia’s annexation of Crimea in 2014 and China’s ever-escalating role in the financial system: Tooze covers them all and much more, in a volume that’s as lively as it is long — which is to say very, on both counts...Tooze has made a specialty of financial collapse and historical disaster. He also understands the language of corporate balance sheets and sovereign debt deeply enough to know that he ought to use it sparingly, translating some of the most byzantine gibberish into elegant English."—The New York Times

“There have been many, many books about the financial crisis, but few, if any, have treated it as a world-wide event...This is economic history on an epic scale, and readers who persevere through the book’s roughly 600 pages of text will find many surprises...Mr. Tooze has written a valuable book about the challenges of managing a tightly connected world economy. The questions he raises resonate in the Age of Trump.”—The Wall Street Journal

“[An] ambitious study of the causes and effects of the financial meltdown that caused the Great Recession… Tooze is not simply telling a story of the financial crisis. Crashed is also the tale of the political intricacies of the crash, the ensuing bailout, and of the great political unraveling that has followed...But it is the configuration of Tooze’s analysis that is novel—he darts from the crisis in Washington to monetary politics in Europe, and on to Chinese fiscal policy to explain how interconnected each of these countries’ economies are. This sends a clear message to those who believe in nationalist economic policies: We are all in this together, to a greater extent than financial institutions and governments have made clear.”—The New Republic

"[An] expansive, essential account of the crisis and the years that followed...Highlighting the economic interconnectedness the world's national economies had achieved by 2008, he shows how the crisis turned the abstract idea of a 'global' economy into something unhappily concrete."—Bookforum

"A compelling new book has arrived which deserves to be at the top of the reading list of anyone interested in the events of 2008 and eager to make sense of the aftermath...Combines simple explanations of complex financial concepts with a majestic narrative tracing the prehistory and destructive path of the crisis across the planet."—The Guardian

"Tooze’s new history of the 2008 crisis and its aftermath offers no shortage of penetrating insights into the calamitous epoch we’ve been living through."—NYMag.com, Daily Intelligencer

"[Tooze] brings a historian’s understanding to the financial crisis and its aftermath . . . The result is an ambitious narrative which runs from the United States, through Western Europe into Central Europe, across the steppes of Russia and onwards to China."—Reuters / Breakingviews

"Bold . . . At the heart of [Crashed] lies a paradox: even though the financial crisis exposed the failings of the American economic model, its aftermath has underscored America’s continuing economic pre-eminence . . . The good thing about Crashed is that it allows for the possibility of American regeneration. Like any sophisticated history, it acknowledges that human agency matters; political and economic forces may shape context but outcomes are not predetermined."—Sebastian Mallaby, Evening Standard (UK)

"[An] intelligent and persuasive account of the global economy since the U.S. mortgage market exploded into a border-jumping financial conflagration."—Strategy+Business

"Likely to stand the test of time as the best history of 2008 written in its immediate shadow . . . As the 10th anniversary of the fall of Lehman Brothers approaches, many books on the financial crisis will be published. Few are likely to match Adam Tooze’s Crashed in scope, ambition or rigour. This is truly contemporary history—the book runs right up to the end of 2017. It is hard to think of another author who can write as authoritatively on such a wide range of subjects."—Prospect Magazine

"Tooze presents a grand unified theory of how we woke up to a world in seemingly headlong retreat from the liberal, democratic, free-trading, ever more prosperous globalized order the West broadly promised at the end of the Cold War."—Foreign Policy

"An important and insightful work . . . combines an economic history with geopolitical analysis of the 2008 financial crisis and the subsequent decade."—Library Journal (starred review)

"First-rate financial history and an admirable effort to wrestle a world-changing series of events between covers."—Kirkus Reviews (starred review)


Praise for The Deluge

“Globe-spanning and wide-ranging…a look at a past that is both terribly remote and hauntingly familiar.”—Salon

"Profound and brilliant…Very rarely, you read a book that inspires you to see a familiar story in an entirely different way." —The Atlantic


Praise for The Wages of Destruction

"Masterful . . . [A] painstakingly researched, astonishingly erudite study…Tooze has added his name to the roll call of top-class scholars of Nazism." —Financial Times

"It is among Adam Tooze's many virtues in The Wages of Destruction that he can write about such matters with authority, explaining the technicalities of bombers and battleships. Hovering over his chronicle are two extraordinary questions: how Germany managed to last as long as it did before the collapse of 1945 and why, under Hitler, it thought it could achieve supremacy at all."—The Wall Street Journal

"An extraordinary achievement…Tooze has produced the most striking history of German strategy in the Second World War that we possess." —History Today

Adam Tooze is the author of Wages of Destruction, winner of the Wolfson and Longman History Today Prize. He is the Kathryn and Shelby Cullom Davis Professor of History at Columbia University. He formerly taught at Yale University, where he was Director of International Security Studies, and at the University of Cambridge. He has worked in executive development with several major corporations and contributed to the National Intelligence Council. He has written and reviewed for Foreign Affairs, the Financial Times, The Guardian, the Sunday Telegraph, The Wall Street Journal, Die Zeit, Sueddeutsche Zeitung, Tageszeitung and Spiegel Magazine, New Left Review, and the London Review of Books.
Loading...
or
Not Currently Available for Direct Purchase