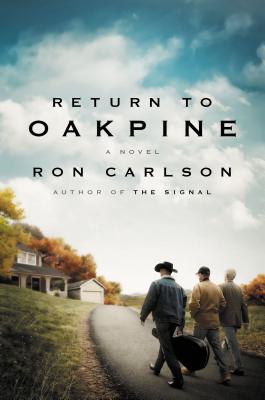 “30 years after the heyday of their high school band 4 men reconvene in their hometown of Oakpine, Wyoming. One has returned to live out his last days and stands as focal point as all the men & those close to them examine how they've lived and how they come to understand what fulfills them. Carlson has written a beautiful, beautiful novel full of soulful searching, gentle wisdom and a bit of clarity gained around the price paid to acknowledge one's weaknesses yet still strive to love. By the end it made me weep.”
— Sheryl Cotleur, Copperfield's Books, Sebastopol, CA
View the List

From a widely admired author, a poignant novel about homecoming, friendship, growing up, and growing old for fans of Richard Ford and Richard Russo
In this finely wrought portrait of western American life, Ron Carlson takes us to the small town of Oakpine, Wyoming, and into the lives of four men trying to make peace with who they are in the world.
In high school, these men were in a band. One of them, Jimmy, left Oakpine for New York City after the tragic death of his brother. A successful novelist, he has returned thirty years later, in 1999 because he is dying.
With Carlson's characteristic grace, we learn what has become of these friends and the different directions of their lives. Craig and Frank never left; Mason, a top lawyer in Denver, is back in town to fix up and sell his parents house. Now that they are reunited, getting the band back together might be the most important thing they can do.
"
Return to Oakpine" is a generous, tender look at friendship, family, and the roads not taken, by a writer at the peak of his craft.


Praise For Return to Oakpine…

Praise for Return to Oakpine

“Carlson’s new novel, with its themes of male friendship and second chances, hoes much the same furrow as his lovely previous books Five Skies and The Signal… Carlson’s crafted an emotive yet pellucid prose style that conveys the profound spiritual satisfactions of homecoming.”—The Wall Street Journal

“As stirring and memorable and utterly rejuvenating a novel as you’ll read…Carlson infuses these pages with such conviction, such perfectly orchestrated pathos…the book is as lean and structured as a sonnet, and it has a split-focus climax as sharp as an ax.”—The Washington Post

“In this new book of his, Ron Carlson has done a splendid job of making a reader feel at home in Oakpine…Carlson can sometime sound the music of the entire novel in a single sentence.”—Alan Cheuse, “All Things Considered,” National Public Radio

“Engaging…These men and their tender, disgruntled families get almost enough to sustain them, but not quite enough to calm the inner cry.  These characters will stay with you because this is how we are too.”—The New York Times Book Review

“[An] eloquent and moving novel…the tension that drives Return to Oakpine [is] between what we want to do and what we need to do, between our dreams and our responsibilities.”—Los Angeles Times

“In this novel by an American master, four middle-aged friends, once members of the same high school band, reunite in their Wyoming hometown thirty years later, reconciling the people they’ve become with the kids they used to be.”—O, The Oprah Magazine

“Carlson excels in small-town Western Americana, in both embracing and interrogating nostalgia in quiet, controlled prose…a humane portrait of the lives we lead and leave behind, peeling back nostalgia’s gold veneer with grace, empathy, and a pragmatic sense of optimism.”—Kansas City Star

Ron Carlson is the author of five story collections and four novels, including "The Signal" and "Five Skies." His fiction has appeared in "Harper s," "The New Yorker," "Playboy," "GQ," "Best American Short Stories," and "The O. Henry Prize Stories." He is the director of the writing program at the University of California at Irvine and lives in Huntington Beach, California."
Loading...
or
Not Currently Available for Direct Purchase