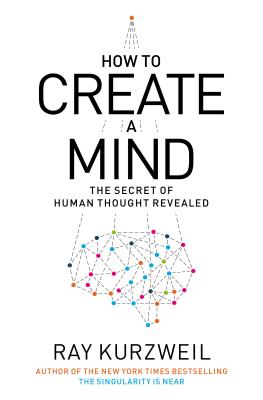 How to Create a Mind

The Secret of Human Thought Revealed

The bold futurist and bestselling author explores the limitless potential of reverse-engineering the human brain
Ray Kurzweil is arguably today's most influential and often controversial futurist. In "How to Create a Mind," Kurzweil presents a provocative exploration of the most important project in human-machine civilization reverse engineering the brain to understand precisely how it works and using that knowledge to create even more intelligent machines.
Kurzweil discusses how the brain functions, how the mind emerges from the brain, and the implications of vastly increasing the powers of our intelligence in addressing the world's problems. He thoughtfully examines emotional and moral intelligence and the origins of consciousness and envisions the radical possibilities of our merging with the intelligent technology we are creating.
Certain to be one of the most widely discussed and debated science books of the year, "How to Create a Mind" is sure to take its place alongside Kurzweil's previous classics which include "Fantastic Voyage: Live Long Enough to Live Forever" and "The Age of Spiritual Machines.


Praise For How to Create a Mind: The Secret of Human Thought Revealed…

Kurzweil's vision of our super-enhanced future is completely sane and calmly reasoned, and his book should nicely smooth the path for the earth's robot overlords, who, it turns out, will be us.
~The New York Times

This book is a breath of fresh air.... Kurzweil makes an argument for optimism.
~Laura Spinney, New Scientist

"It is rare to find a book that offers unique and inspiring content on every page. How to Create a Mind achieves that and more. Ray has a way of tackling seemingly overwhelming challenges with an army of reason, in the end convincing the reader that it is within our reach to create nonbiological intelligence that will soar past our own. This is a visionary work that is also accessible and entertaining.
~Rafael Reif, president, MIT

"Kurzweil's new book on the mind is magnificent, timely, and solidly argued! His best so far!"
~Marvin Minsky, MIT Toshiba Professor of Media Arts and Sciences; cofounder of the MIT Artificial Intelligence Lab; widely regarded as "the father of artificial intelligence"

"If you ever wondered about how your mind works, read this book. Kurzweil's insights reveal key secrets underlying human thought and our ability to recreate it. This is an eloquent and thought-provoking work."
~Dean Kamen, physicist; inventor of the first wearable insulin pump, the HomeChoice dialysis machine, and the IBOT mobility system; founder of FIRST; recipient of the National Medal of Technology

"One of the eminent AI pioneers, Ray Kurzweil, has created a new book to explain the true nature of intelligence, both biological and nonbiological. The book describes the human brain as a machine that can understand hierarchical concepts ranging from the form of a chair to the nature of humor. His important insights emphasize the key role of learning both in the brain and in AI. He provides a credible road map for achieving the goal of super-human intelligence, which will be necessary to solve the grand challenges of humanity.
~Raj Reddy, founding director, Robotics Institute, Carnegie Mellon University; recipient of the Turing Award from the Association for Computing Machinery

"Ray Kurzweil pioneered artificial intelligence systems that could read print in any type style, synthesize speech and music, and understand speech. These were the forerunners of the present revolution in machine learning that is creating intelligent computers that can beat humans in chess, win on Jeopardy!, and drive cars. His new book is a clear and compelling overview of the progress, especially in learning, that is enabling this revolution in the technologies of intelligence. It also offers important insights into a future in which we will begin solving what I believe is the greatest problem in science and technology today: the problem of how the brain works and of how it generates intelligence."
~Tomaso Poggio, Eugene McDermott Professor, MIT Department of Brain and Cognitive Sciences; director, MIT Center for Biological and Computational Learning; former chair, MIT McGovern Institute for Brain Research; one of the most cited neuroscientists in the world

"This book is a Rosetta stone for the mystery of human thought. Even more remarkably, it is a blueprint for creating artificial consciousness that is as persuasive and emotional as our own. Kurzweil deals with the subject of consciousness better than anyone from Blackmore to Dennett. His persuasive thought experiment is of Einstein quality: It forces recognition of the truth."
~Martine Rothblatt, chairman and CEO, United Therapeutics; creator of Sirius XM Satellite Radio

"Kurzweil's book is a shining example of his prodigious ability to synthesize ideas from disparate domains and explain them to readers in simple, elegant language. Just as Chanute's Progress in Flying Machines ushered in the era of aviation over a century ago, this book is the harbinger of the coming revolution in artificial intelligence that will fulfill Kurzweil's own prophecies about it."
~Dileep George, AI scientist; pioneer of hierarchical models of the neocortex; cofounder of Numenta and Vicarious Systems

"Ray Kurzweil's understanding of the brain and artificial intelligence will dramatically impact every aspect of our lives, every industry on Earth, and how we think about our future. If you care about any of these, read this book!"
~Peter H. Diamandis, chairman and CEO, X PRIZE; executive chairman, Singularity University; author of the New York Times bestseller Abundance: The Future Is Better Than You Think

Ray Kurzweil is the author of "The New York Times" bestseller "The Singularity Is Near" and the national bestseller "The Age of Spiritual Machines," among others. One of the leading inventors of our time, he was inducted into the National Inventors Hall of Fame in 2002. He is the recipient of many honors, including the National Medal of Technology, the nation s highest honor in technology. He lives in Boston."
or
Not Currently Available for Direct Purchase