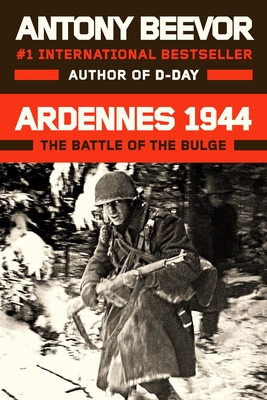 The Battle of the Bulge

The prizewinning historian and bestselling author of D-Day, Stalingrad, and The Battle of Arnhem reconstructs the Battle of the Bulge in this riveting new account

On December 16, 1944, Hitler launched his ‘last gamble’ in the snow-covered forests and gorges of the Ardennes in Belgium, believing he could split the Allies by driving all the way to Antwerp and forcing the Canadians and the British out of the war. Although his generals were doubtful of success, younger officers and NCOs were desperate to believe that their homes and families could be saved from the vengeful Red Army approaching from the east. Many were exultant at the prospect of striking back.

The allies, taken by surprise, found themselves fighting two panzer armies. Belgian civilians abandoned their homes, justifiably afraid of German revenge. Panic spread even to Paris. While some American soldiers, overwhelmed by the German onslaught, fled or surrendered, others held on heroically, creating breakwaters which slowed the German advance.

The harsh winter conditions and the savagery of the battle became comparable to the Eastern Front. In fact the Ardennes became the Western Front’s counterpart to Stalingrad. There was terrible ferocity on both sides, driven by desperation and revenge, in which the normal rules of combat were breached. The Ardennes—involving more than a million men—would prove to be the battle which finally broke the back of the Wehrmacht.

In this deeply researched work, with striking insights into the major players on both sides, Antony Beevor gives us the definitive account of the Ardennes offensive which was to become the greatest battle of World War II.

Antony Beevor is the bestselling author of D-Day: The Battle for Normandy, which received the Royal United Services’ Institute Westminster Medal; The Battle for Spain, which received the La Vanguardia Prize; Paris After the Liberation 1944–1949; Stalingrad, winner of the Samuel Johnson Prize, the Wolfson Prize for History, and the Hawthornden Prize for Literature; and The Fall of Berlin 1945, which received the first Longman-History Today Trustees’ Award. He is the recipient of the 2014 Pritzker Military Museum & Library Literature Award for Lifetime Achievement in Military Writing. Beevor lives in England.

Praise For Ardennes 1944: The Battle of the Bulge…

“One of the finest narrative military historians now writing...What makes Ardennes 1944 so effective…is not just the vividness of the prose, the clarity of the author’s presentation of tactical events or his skill at evoking through description and careful quotation the look and even smell of the battlefield. Beevor also does a brilliant job of weaving together the grand operational and the tactical narratives, showing how the decisions of generals do, or do not, shape circumstances on the ground.”—The New York Times Book Review

“[A] searing account…A salutary reminder of that thin veneer detected by Freud between the civilized and the primitive in each of us. Ardennes 1944 ought to prompt some careful reflection on our modern age.”
—The Wall Street Journal

“[Beevor] has become one of the most respected, as well as globally popular, chroniclers of the struggle . . . Beevor’s books have hitherto gained less celebrity and sales success in the US than they deserve, but Ardennes 1944 may be the one to change that.”
—New York Review of Books

“Award-winning military historian Beevor examines the Battle of the Bulge in-depth…. The result is a panoramic and remarkably frank treatment of the German attack, ordered by Hitler as a last-ditch attempt to reverse the momentum of battle in Western Europe. Beevor skewers the pretensions and weaknesses of generals and details atrocities and mistreatment of both civilians and surrendering enemies by both sides…[T]his is a treasure of memorable portraits, striking details, fascinating revelations, and broad insights—likely to be the definitive account of the battle for years to come. Essential reading for anyone interested in World War II.”—Kirkus Reviews (Starred Review)

“Even readers well-versed on the war in Europe will welcome this book. It is exhaustively researched and full of fresh insights and thoughtful explanations. Those who want to understand how the attack unfolded and why it failed will not find a more valuable addition to the literature on World War II.”
—The Christian Science Monitor

"Beevor (The Second World War; D-Day), who has won numerous awards for his works, demonstrates here why he is a celebrated historian and writer. Ardennes 1944, or 'The Battle of the Bulge,' is squarely focused on this critical World War II battle spanning August 1944 to April 1945. The author tracks troop movements and positioning throughout the long conflict, while accounting for decisions made on the field, in the war room, and all the way up the chain of command to Gen. Dwight Eisenhower. The writing is both intense and gripping...a wonderful read."—Library Journal

“To write the history of war is above all to tell its story. No one tells it better than Antony Beevor. He combines wide-ranging archival research, publishedsources, personal accounts, and firsthand knowledge of the terrain. He moves easily among discussions of policy and strategy, the personalities and interactions of commanders, and the viewpoints and standpoints of the people at the sharp end—not only those in the tanks and the foxholes but the civilians caught in the mesh of modern war. And Ardennes 1944 is arguably his best book to date.”—MHQ magazine

"Beevor has the art of preserving the individual perspective on the battlefield while placing it among the perspectives of platoon, regiment, division, commanders, politicians and civilians... Beevor cares about the soldiers and the truth, an old-fashioned set of concerns that is balanced with modern literary skill. This book clarifies, without simplifying, the human experiences and political stakes of the battle for the Ardennes, bringing realism to the battlefield and coherence to the larger history of the war."—Timothy Snyder in The Guardian

“Indispensible.”—David Aaronovitch in The Times

“Ardennes 1944 is a book that plays very much to Beevor’s strengths, combining the view from the top with the view from below and vividly portraying the dark realities of military combat. . . Beevor has delivered another perfectly judged episode of the second world war, a worthy companion to the works that made his name. Yet again, he has shown that he has the gift of alchemy.”—Roger Moorhouse, The Financial Times

"What builds up is an exemplary picture of the misery and horror of this most appalling conflict, in which more than a million men fought in conditions comparable to those on the Eastern Front."—Clare Mulley, The Australian

“No one has recounted it better than Beevor. His gripping, beautifully written narrative moves seamlessly from the generals’ command posts to the privates in their snow-covered foxholes, and confirms him as the finest chronicler of war in the business.”—Saul David, The Observer

“Beevor weaves a brilliant narrative out of all this drama. As in his previous books, his gifts are strongest in focusing on telling details from different perspectives. . . a vital historical insight.”—Mark Urban, The Sunday Times

“The best military prose of our era.” —El País, Spain

“If there’s one thing that sets Beevor apart from other historians – beyond his gifts as a storyteller – it’s because he is not afraid to look at the most uncomfortable, even frightening subjects,  but does so in a way that does not threaten the reader. There’s rarely a judgmental note to his writing. It’s like having Virgil there to lead you through the underworld: he doesn’t leave you stranded amid the horror, but leads you back out again, a wiser person for having undergone the journey.”—Keith Lowe in The Daily Telegraph

“The Master of War . . . The Ardennes is the latest of Beevor’s books on the campaigns of the Second World War. It is a superb addition to the canon which has taken us from Stalingrad to Normandy in 1944 and the final gruesome battle for Berlin, not forgetting the masterly single-volume history of the entire war. It is written with all of Beevor’s customary verve and elegance. His remarkable and trademark ability is to encompass the wide sweep of campaigns yet never forget the piquant details of what happened to the individual. . . He focuses brilliantly on the key moments that turned the battle.”—Robert Fox in the Evening Standard

“Beevor weaves a brilliant narrative out of all this drama. As in his previous books, his gifts are strongest in focusing on telling details from different perspectives. . . a vital historical insight.”—Mark Urban in The Sunday Times

“Beevor is as good on the rows behind the front lines as he is on the battles themselves . . . A sweeping, sobering read, written with all the confidence and aplomb that Beevor fans expect.”—Marcus Tanner in The Independent

“Exemplary. . . as ever, Beevor writes with an eye for the personal that keeps the narrative flowing. . .  Also admirable is the way Beevor addresses both German and Allied courage — and war crimes. Allied crimes have sometimes been underplayed or presented solely in terms of hot-blooded revenge. Beevor is braver, rightly exposing the open approval of a number of Allied generals for a policy of retaliatory execution of German prisoners. This is history as it should be written. . . Hitler’s greatest mistake, Beevor argues, was that he ‘misjudged the soldiers of an army [he] had affected to despise’. This is above all the story of those soldiers, and for that alone it deserves the widest audience.”—Clare Mulley in The Spectator
or support indie stores by buying on
Copyright © 2020 American Booksellers Association