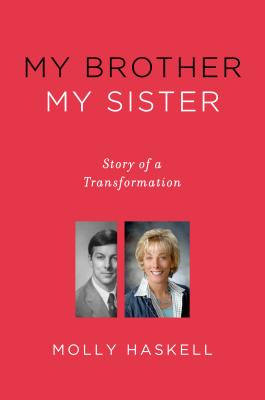 My Brother My Sister

Story of a Transformation

A feminist film critic's thoughtful, outspoken memoir about transgender and family
On a visit to New York, the brother of well-known film critic Molly Haskell dropped a bombshell: Nearing age sixty, and married, he had decided to become a woman. In the vein of Jan Morris's classic "Conundrum "and "Jennifer Finney Boylan's She's Not There, "a transgender memoir, Haskell's "My Brother My Sister "gracefully explores a delicate subject, this time from the perspective of a family member.
Haskell chronicles her brother Chevey's transformation through a series of psychological evaluations, grueling surgeries, drug regimens, and comportment and fashion lessons as he becomes Ellen. Despite Haskell's liberal views on gender roles, she was dumbfounded by her brother's decision. With candor and compassion, she charts not only her brother's journey to becoming her sister, but also her own path from shock, confusion, embarrassment, and devastation to acceptance, empathy, and love.
Haskell widens the lens on her brother's story to include scientific and psychoanalytic views. In an honest, informed voice, she has revealed the controversial world of gender reassignment and transsexuals from both a personal and a social perspective in this frank and moving memoir.


Praise For My Brother My Sister: Story of a Transformation…

Advance Praise for MY BROTHER MY SISTER

“Molly Haskell has written a bracingly candid book about the mystery of sexual identity and the often indirect path we take to claiming it. This is a riveting account of the passion and tenacity it takes to go up against the constrictions and limitations society imposes on our deepest dreams of self.”—Daphne Merkin, author of Dreaming of Hitler and Enchantment

“In this gripping memoir, the author's feelings are parsed with a precision and candor that bring universal resonance to its seemingly singular subject.  The wisdom and compassion that shine through on every page are as necessary as they are rare.”—Phillip Lopate, author To Show and to Tell

“Life’s losses and transitions – in this case, sex changes and death – are heartbreaking and enigmatic, yet Haskell confronts them honestly with tremendous courage, intelligence and love.  A beautiful book.”—Lily Tuck, National Book Award-winning author of The News from Paraguay

“Beautiful and pitch perfect. A wonderfully personal story about family and relationships and secrets and evolution and how mysterious we remain even to ourselves and our closest relatives.”—A. M. Homes, Women’s Prize-winning author of May We Be Forgiven

“A remarkable and indispensable book. In My Brother My Sister, Haskell documents her sibling's amazing journey of transformation from male to female – but it's not about sex, it's about identity – about the price of belonging. Above all this is an achingly personal story. It takes courage for brother Chevey to become sister Ellen and for Haskell to confront her doubts. It also takes a great deal of love.”—Patricia Bosworth, author of Jane Fonda: The Private Life of a Public Woman

"As the conversation surrounding...transgender continues, this work makes a significant contribution to its literature."—Publishers Weekly

“Haskell eloquently chronicles the emotional torrent [for] both siblings.”—Booklist

“With candor and sly humor, [Haskell] questions her ideas about womanhood and considers the relationship between gender and identity….A deiscrening, vital memoir.”—Kirkus

Molly Haskell is a nationally recognized feminist film critic and the author of three books of film criticism. She has contributed to many publications, including "The New York Times," "Esquire," "The Nation," and "Vogue." She lives in New York City.
Loading...
or
Not Currently Available for Direct Purchase