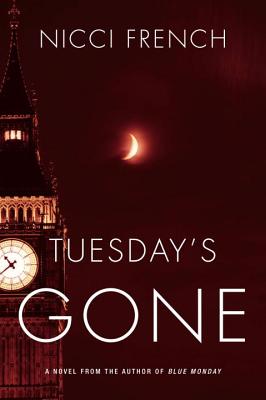 ""Blue Monday" leaves readers with the promise of intriguing tales to come" --"People" (four-star review)
Internationally bestselling authors Nicci Gerard and Sean French, writing as Nicci French, have sold more than eight million copies of their books worldwide. But nothing they've written written before has grabbed the attention of reviewers and readers like "Blue
Monday" and its iconic heroine, Frieda Klein. In a starred review, "Publishers Weekly" called it a "superb psychological thriller . . . with brooding atmosphere, sustained suspense, a last-minute plot twist, and memorable cast of characters."
In "Tuesday's Gone," a London social worker makes a routine home visit only to discover her client, Michelle Doyce, serving afternoon tea to a naked, decomposing corpse. With no clues as to the dead man's identity, Chief Inspector Karlsson again calls upon Frieda for help. She discovers that the body belongs to Robert Poole, con man extraordinaire. But Frieda can't shake the feeling that the past isn't done with her yet. Did someone kill Poole to embroil her in the investigation? And if so, is Frieda herself the next victim?
A masterpiece of paranoia, "Tuesday's Gone "draws readers inexorably into a fractured and faithless world as it brilliantly confirms Frieda Klein as a quintessential heroine for our times.

"Tuesday’s Gone is one of those great, great books in the mystery genre wherein the more you know, the less you know—peel back one stratum and you cannot shovel fast enough to get into the next, which reveals anything but what you expected. French takes the novel on a number of unexpected twists and turns, not the least of which relates back to BLUE MONDAY, which, as it turns out, didn’t quite end on its last page."
—Bookreporter.com

“[A] superb psychological thriller . . . With its brooding atmosphere, sustained suspense, last-minute plot twist, and memorable cast of characters, this series debut will leave readers eager to discover what color Tuesday will be.”
—Publishers Weekly, starred review

Nicci French is the pseudonym for the internationally bestselling writing partnership of suspense writers Nicci Gerrard and Sean French. They are married and live in Suffolk and London, England.
Loading...
or
Not Currently Available for Direct Purchase