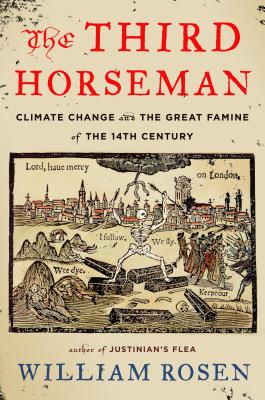 Climate Change and the Great Famine of the 14th Century

How a seven-year cycle of rain, cold, disease, and warfare created the worst famine in European history
In May 1315, it started to rain. It didn t stop anywhere in north Europe until August. Next came the four coldest winters in a millennium. Two separate animal epidemics killed nearly 80 percent of northern Europe's livestock. Wars between Scotland and England, France and Flanders, and two rival claimants to the Holy Roman Empire destroyed all remaining farmland. After seven years, the combination of lost harvests, warfare, and pestilence would claim six million lives one eighth of Europe's total population.
William Rosen draws on a wide array of disciplines, from military history to feudal law to agricultural economics and climatology, to trace the succession of traumas that caused the Great Famine. With dramatic appearances by Scotland's William Wallace, and the luckless Edward II and his treacherous Queen Isabella, history's best documented episode of catastrophic climate change comes alive, with powerful implications for future calamities.

William Rosen, a former editor and publisher at Macmillan, Simon & Schuster, and The Free Press, is the author of Justinian s Flea and The Most Powerful Idea in the World. He lives in New Jersey."
Loading...
or
Not Currently Available for Direct Purchase