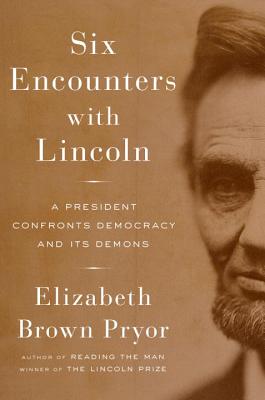 Praise For Six Encounters with Lincoln: A President Confronts Democracy and Its Demons…

Praise for Six Encounters with Lincoln:

“Pryor is particularly adept at conveying the impossibility of Lincoln’s task:  to represent a profoundly fractured country in which, as one of Lincoln’s friends put it, ‘the eyes of the whole nation will be upon you while unfortunately the ears of one half of it will be closed to any thing you say.’”  –The Wall Street Journal

“This history aims at deconstructing Lincoln’s mythic reputation as the Great Emancipator to arrive at a more nuanced view . . . Pryor paints a provocative historical portrait while testing common assumptions about an American icon.” – The New Yorker

“In her meticulously researched study of these little-known but arresting encounters with Lincoln, Pryor teases out their meaning with cool discrimination, sensitivity, and a vivid pen. She exposes a human president – socially awkward, obstinate, intolerant – struggling to cope in time of war with the fluid messiness of democratic government. This is a brilliant work that is bound to provoke animated scholarly discussion.”  –Richard Carwardine, author of Lincoln:  A Life of Purpose and Power

“A daring, provocative, and exceptionally important book that convincingly challenges many of the assumptions on which Lincoln’s greatness are based. Pryor examines Lincoln’s often startling behavior in heretofore little-known but highly revealing encounters, and from them she expertly weaves a larger narrative of his fitful progress as the beleaguered leader of a nation at war. The research is truly prodigious, the writing graceful and assured. One of the most significant works on Lincoln of this generation.” -Peter Cozzens, author of The Earth Is Weeping: The Indian Wars for the American West

“Deeply researched, telling moments in the life of arguably the most written-about man in history. . .gets beyond the hagiographic portrayals of Lincoln, allowing rare glimpses of the man as vulnerable, clumsy, inarticulate, and very human. . .Kudos to Pryor for offering readers something fresh about our 16th president – no small feat.”  – Kirkus Reviews (starred)

“Pryor’s impressive final book will be of great appeal to Lincoln aficionados. . .What makes the encounters particularly fascinating is that the participants recorded them at the time, so they remain uncolored by the sentimentality of post-assassination remembrance.”  – Publishers Weekly

Elizabeth Brown Pryor (1951–2015) combined careers as an award-winning historian and a senior diplomat in the American Foreign Service. She was the author of the biography Clara Barton: Professional Angel, considered the authoritative work on the founder of the American Red Cross, and Reading the Man: A Portrait of Robert E. Lee Through His Private Letters, which won the 2008 Lincoln Prize, the 2007 Jefferson Davis Award, the 2008 Richard B. Harwell Book Award, and the 2007 Richard S. Slatten Award for Excellence in Virginia Biography.
Loading...
or
Not Currently Available for Direct Purchase