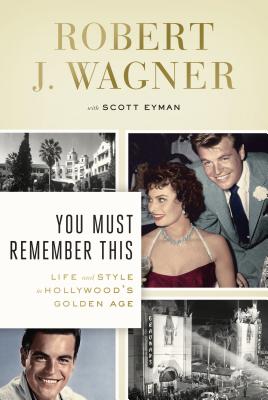 The legendary actor and bestselling author of "Pieces of My Heart "offers a nostalgic look at Hollywood's golden age
For millions of movie lovers, no era in the history of Hollywood is more beloved than the period from the 1930s through the 1950s, the golden age of the studio system. Not only did it produce many of the greatest films of the American cinema, but it was then that Hollywood itself became firmly established as the nation's ultimate symbol of glamour and style, its stars almost godlike figures whose dazzling lives were chronicled in countless features in magzazines like "Photoplay "and "Modern Screen."
While these features were a standard part of the work of studio publicity departments, they told eager readers little about what life was really like for these celebrities once they stepped out of the public eye. No one is better qualified to tell that story than Robert Wagner, whose own career has spanned more than five decades and whose "New York Times" bestseller, "Pieces of My Heart," was one of the most successful Hollywood memoirs in recent years. "You Must Remember This" is Wagner's intimate ode to a bygone time, one of magnificent homes, luxurious hotels, opulent night-clubs and restaurants, and unforgettable parties that were all part of the Hollywood social scene at its peak.
From a dinner party at Clifton Webb's at which Judy Garland sang Gershwin at the piano to golf games with Fred Astaire, from Jimmy Cagney's humble farmhouse in Coldwater Canyon to the magnificent beach mansion built by William Randolph Hearst for Marion Davies, from famous restaurants like the Brown Derby and Romanoff's to nightspots like the Trocadero and the Mocambo, Wagner shares his affectionate memories and anec-dotes about the places and personalities that have all become part of Hollywood legend.
As poignant as it is revealing, "You Must Remember This" is Wagner's account of Hollywood as he saw it, far from the lights and cameras and gossip columns and a tender farewell to the people of a mythical place long since transformed, and to a golden age long since passed.

Robert Wagneris the star of such films as "A Kiss Before Dying," "The Longest Day," "The Pink Panther," and most recently, the Austin Powers franchise. On television, he starred in "It Takes a Thief "(with Fred Astaire), "Switch "(with Eddie Albert and Sharon Gless), and "Hart to Hart "(with Stefanie Powers). He has recently appeared on "Two and a Half Men "and "NCIS." He is married to actress Jill St. John and lives in Aspen, Colorado."

Praise For You Must Remember This: Life and Style in Hollywood's Golden Age…

"In terms of grace and style, you couldn't ask for a better tour director than actor Robert Wagner."
~Douglass K. Daniel, Associated Press

" [A] charming tribute to off-screen lives during a period many may regard as Hollywood's finest."
~Kirkus Reviews

"[You Must Remember This] takes you into the palatial mansions, castles and luxurious houses of the stars in great detail. It will become a great reference book for all lovers of silent and talkie movies and the actors and the actresses who peopled those homes. Fairbanks, Pickford and Chaplin, they are all here amongst many others."
~Ann McDonald, RedCarpetCrash.com

"With great affection and a twinkle in his eye, veteran actor Wagner recalls Hollywood's glory days of the 1940s and early 1950s, when class, manners, friendship, and a code of values ruled the city of stars."
~Publishers Weekly