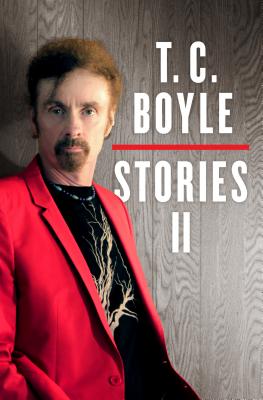 A second volume of collected short fiction from the bestselling author and winner of the 2015 Rea Award for the Short Story
Few authors write with such sheer love of story and language as T.C. Boyle, and that is nowhere more evident than in his inventive, wickedly funny, and always entertaining short stories. In 1998, "T.C. Boyle Stories "brought together the author's first four collections to critical acclaim. Now, "T.C. Boyle Stories II" gathers the work from his three most recent collections along with fourteen new tales previously unpublished in book form as well as a preface in which Boyle looks back on his career as a writer of stories and the art of making them.
By turns mythic and realistic, farcical and tragic, ironic and moving, Boyle's stories have mapped a wide range of human emotions. The fifty-eight stories in this new volume, written over the last eighteen years, reflect his maturing themes. Along with the satires and tall tales that established his reputation, readers will find stories speaking to contemporary social issues, from air rage to abortion doctors, and character-driven tales of quiet power and passion. Others capture timeless themes, from first love and its consequences to confrontations with mortality, or explore the conflict between civilization and wildness. The new stories find Boyle engagingly testing his characters emotional and physical endurance, whether it's a group of giants being bred as weapons of war in a fictional Latin American country, a Russian woman who ignores dire warnings in returning to her radiation-contaminated home, a hermetic writer who gets more than a break in his routine when he travels to receive a minor award, or a man in a California mountain town who goes a little too far in his concern for a widow.
Mordant wit, emotional power, exquisite prose: it is all here in abundance. "T.C. Boyle Stories II "is a grand career statement from a writer whose imagination knows no bounds.

T.C. Boyle is the author of fourteen novels, including "Drop City," which was a finalist for the National Book Award, and "World s End," winner of the PEN/Faulkner Award. He has also written nine short story collections. He lives near Santa Barbara, California."

“Boyle’s stories mix brilliance with high-concept pyrotechnics, meditations with whiz-bangery…he holds nothing back in Stories II…it’s an edifice intended to define a legacy.”—The Los Angeles Times

“The first volume of this abidingly exiting writer’s collected short fiction drew refreshed interest in and admiration for his incontestable mastery of the short form.  The second volume, containing 58 stories written since the previous volume appeared, is poised to garner equal enthusiasm…the volume itself poses the question, Can every story by one author be a masterpiece? Boyle’s brilliant book submits itself as evidence for that possibility.” —Booklist, starred review

“A fine and welcome summation – till the next volume – by one of the best storytellers at work today…most are gems, marked by beautiful language, nicely imagined moments, and occasionally dashed dreams.” —Kirkus, starred review