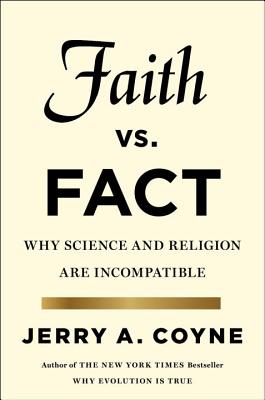 Why Science and Religion Are Incompatible

The New York Times bestselling author explains why any attempt to make religion compatible with science is doomed to fail.

What we read in the news today is full of subjectivity, half-truths, and blatant falsehoods; and thus it is more necessary now than ever to safeguard the truth with facts. In his provocative new book, evolutionary biologist Jerry A. Coyne aims to do exactly that in the arena of religion. In clear, dispassionate detail he explains why the toolkit of science, based on reason and empirical study, is reliable, while that of religion—including faith, dogma, and revelation—leads to incorrect, untestable, or conflicting conclusions.

Coyne is responding to a national climate in which over half of Americans don’t believe in evolution (and congressmen deny global warming), and warns that religious prejudices and strictures in politics, education, medicine, and social policy are on the rise. Extending the bestselling works of Richard Dawkins, Daniel Dennett, and Christopher Hitchens, he demolishes the claims of religion to provide verifiable “truth” by subjecting those claims to the same tests we use to establish truth in science.

Coyne irrefutably demonstrates the grave harm—to individuals and to our planet—in mistaking faith for fact in making the most important decisions about the world we live in.

Praise For Faith Versus Fact: Why Science and Religion Are Incompatible…

“Timely and important. Jerry Coyne expertly exposes the incoherence of the increasingly popular belief that you can have it both ways: that God (or something God-ish, God-like, or God-oid) sort-of exists; that miracles kind-of happen; and that the truthiness of dogma is somewhat-a-little-bit-more-or-less-who’s-to-say-it-isn’t like the truths of science and reason.”
—Steven Pinker, Johnstone Family Professor of Psychology, Harvard University; author of The Better Angels of Our Nature

“[N]one make the case for the final divorce of religion and science, with permanent restraining orders against harassment and stalking of science by religion, better than Coyne.”—Ray Olson, Booklist (starred review)

“An important book that deserves an open-minded readership.”—Kirkus Reviews

“Many people are confused about science—about what it is, how it is practiced, and why it is the most powerful method for understanding ourselves and the universe that our species has ever devised. In Faith vs. Fact, Coyne has written a wonderful primer on what it means to think scientifically, showing that the honest doubts of science are better—and more noble—than the false certainties of religion. This is a profound and lovely book. It should be required reading at every college on earth.”
—Sam Harris, author of  The End of Faith, The Moral Landscape, and Waking Up

“The distinguished geneticist Jerry Coyne trains his formidable intellectual firepower on religious faith, and it’s hard to see how any reasonable person can resist the conclusions of his superbly argued book. Though religion will live on in the minds of the unlettered, in educated circles faith is entering its death throes. Symptomatic of its terminal desperation are the ‘apophatic’ pretensions of ‘sophisticated theologians,’ for whose empty obscurantism Coyne reserves his most devastating sallies. Read this book and recommend it to two friends.”
—Richard Dawkins, author of The God Delusion

Praise for Why Evolution is True

“Outstandingly good . . . Coyne’s knowledge of evolutionary biology is prodigious, his deployment of it as masterful as his touch is light.”
—Richard Dawkins, The Times Literary Supplement

“Coyne is as graceful a stylist and as clear a scientific explainer as Darwin himself (no mean feat) . . . one of the best single-volume introductions to evolutionary theory ever.”
—Wired

“The joy Coyne takes in his work is evident on every page, whether he’s offering a bone-by-bone analysis of how dinosaurs evolved into birds or describing how docile Japanese honeybees have come up with their particularly incendiary defense against marauding giant hornets.”
—San Francisco Chronicle

“In nine crisp chapters . . . the respected evolutionary biologist lays out an airtight case that Earth is unspeakably old and that new species evolve from previous ones.”
—Boston Globe

“Coyne’s book is the best general explication of evolution that I know of and deserves its success as a best seller.”
—R.C. Lewontin, New York Review of Books

“I recommend that Mr. Coyne’s insightful and withering assessment of evolutionary studies of human psychology and behavior be taped to the bathroom mirrors of all those (perhaps especially journalists) inclined to be swept into excited announcements of What Evolution Shows About Us.”
—Philip Kitcher, The Wall Street Journal

“It’s always a pleasure to tell people about a wonderful book, especially when the subject of the book is of universal and critical importance. Evolutionary geneticist Jerry A. Coyne has given us such a book. . . . A book that may change the way you look at things—if you dare.”
—The Huffington Post

“In this 200th anniversary year of Darwin’s birth, Why Evolution is True ranks among the best new titles flooding bookstores.”
—Christian Science Monitor

“Why Evolution is True is the book I was hoping would be written someday: an engaging and accessible account of one of the most important ideas ever conceived by mankind. The book is a stunning achievement, written by one of the world's leading evolutionary biologists. Coyne has produced a classic—whether you are an expert or novice in science, a friend or foe of evolutionary biology, reading Why Evolution is True is bound to be an enlightening experience.”
—Neil Shubin, author of Your Inner Fish

“Jerry Coyne has long been one of the world's most skillful defenders of evolutionary science in the face of religious obscurantism. In Why Evolution is True, he has produced an indispensable book: the single, accessible volume that makes the case for evolution. But Coyne has delivered much more than the latest volley in our "culture war"; he has given us an utterly fascinating, lucid, and beautifully written account of our place in the natural world. If you want to better understand your kinship with the rest of life, this book is the place to start.”
—Sam Harris, founder of the Reason Project and author of the New York Times best sellers The End of Faith and Letter to a Christian Nation

“Scientists don't use the word 'true' lightly, but in this lively and engrossing book, Jerry Coyne shows why biologists are happy to use it when it comes to evolution. Evolution is 'true' not because the experts say it is, nor because some worldview demands it, but because the evidence overwhelmingly supports it. There are many superb books on evolution, but this one is superb in a new way — it explains out the latest evidence for evolution lucidly, thoroughly, and with devastating effectiveness.”
—Steven Pinker, Harvard University, and author of The Stuff of Thought: Language as a Window into Human Nature

“For anyone who wishes a clear, well-written explanation of evolution by one of the foremost scientists working on the subject, Why Evolution is True should be your choice.”
—E. O. Wilson, author of The Social Conquest of Earth and Letters to a Young Scientist

“I once wrote that anybody who didn't believe in evolution must be stupid, insane, or ignorant, and I was then careful to add that ignorance is no crime. I should now update my statement. Anybody who doesn't believe in evolution is stupid, insane, or hasn't read Jerry Coyne. I defy any reasonable person to read this marvellous book and still take seriously the "breathtaking inanity" that is intelligent design "theory" or its country cousin, young earth creationism.”
—Richard Dawkins, author of The God Delusion

Jerry A. Coyne is professor emeritus at the University of Chicago in the Department of Ecology and Evolution, where he specialized in evolutionary genetics. His New York Times bestseller, Why Evolution Is True, was one of Newsweek’s “50 Books for Our Times” in 2010.
Loading...
or
Not Currently Available for Direct Purchase