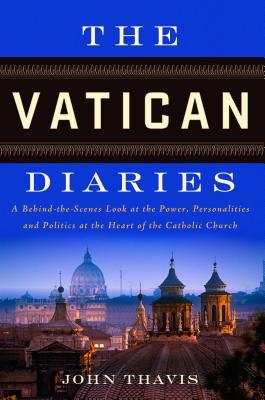 A Behind-The-Scenes Look at the Power, Personalities and Politics at the Heart of the Catholic Church

The revealing "New York Times" bestseller examines the reign of Pope Benedict, the papal conclave process, and the history of one of the world's oldest and most mysterious institutions
For more than twenty-five years John Thavis held one of the most fascinating journalistic jobs in the world: reporting on the inner workings of the Vatican. His daily exposure to the power, politics, and personalities in the seat of Roman Catholicism gave him a unique, behind-the-scenes perspective on an institution that is far less monolithic and unified than it first appears. Thavis reveals Vatican City as a place where Curia cardinals fight private wars, scandals threaten to undermine papal authority, and reverence for the past is continually upended by the practical considerations of modern life.
Thavis takes readers from a bell tower high above St. Peter's to the depths of the basilica and the saint's burial place, from the politicking surrounding the election of a new pope and the ever-growing sexual abuse scandals around the world to controversies about the Vatican's stand on contraception, and more.
Perceptive, sharply written, and witty, "The Vatican Diaries" will appeal not only to Catholics (lapsed as well as devout) but to any readers interested in international diplomacy and the role of religion in an increasingly secularized world.


Praise For The Vatican Diaries: A Behind-The-Scenes Look at the Power, Personalities and Politics at the Heart of the Catholic Church…

"Wonder what's going on behind those huge doors at the Vatican? Wonder what those cardinals are up to as they scurry about getting ready to elect a new pope? Wonder what the man who rings the bells when that new pope is finally elected is thinking? Thavis answers all in this fascinating book."
~USA Today

"A veritable handbook on all things Vatican."
~The Daily Beast

"A thoughtful meditation on recent papal administrations and the bureaucrats, functionaries, and emissaries who advance or thwart Rome’s global ambitions."
~New York Journal of Books

"Most fascinating is Thavis' generous assessment of Benedict XVI, whom he sees as an almost tragic figure."
~The New Yorker

"Thavis’s Vatican Diaries is well worth putting on your Amazon wish list."
~Forbes

"[The Vatican Diaries] succeeds well in presenting the Roman Curia as a flesh-and-blood community, a byzantine theater of the sacred."
~National Catholic Reporter

"A lively book that's steeped in history and personality."
~The Eagle Tribune

“Thavis has offered this rare, perceptive and highly readable glimpse into a power structure that is less in control than many would have us believe.”
~America

"Illuminating and fully accessible to members of the faith and doubters alike."
~Kirkus Reviews

"In an age when social media threatens to emasculate news and current affairs, Thavis' work is a refreshing sign that great journalism is not dead. Instead of the inane trivia that now passes for 'news' , Thavis provides us with an account of great depth carefully tempered with censure and sympathy."
~Justin Cahill, Booktopia

"An American Catholic who has done his homework, learned Latin and Italian, made friends in high places, found his way for thirty years in the maze of Church bureaucracy, gives us a humane and realistic and (yes) humorous picture of a mortal institution that guides hundreds of millions of mortals along the path from birth to death and beyond. To an old Prot like me, it's a tour of alien terrain and a bridge to old and dear friends."
~Garrison Keillor

“Vatican Diaries is a must-read for anyone interested in the Vatican’s role in the Catholic Church and the world.
~Thomas J. Reese, S.J.

"The Vatican Diaries by John Thavis provides us with an intriguing and much needed antidote to one of the most common problems affecting many Catholics and non-Catholics who look at the Vatican these days: the assumption of the cold ruthlessness of the "machine". Thavis shows us also the deeply human side of the Vatican, the last Empire and the last, great theater of the sacred in Western Christianity."
~Massimo Faggioli, University of St. Thomas

"In this highly readable memoir of being a journalist at the Vatican, John Thavis follows the conclaves, sex scandals, internal backstabbing and olympian nature of the popes with a sense of comic relief at the caravan passing through his viewfinder."
~Jason Berry, author of Render unto Rome: The Secret Life of Money in the Catholic Church

John Thavis recently retired as the prizewinning Rome bureau chief of Catholic News Service, a position he had held since 1983. He recently served as an ABC correspondent throughout the sudden resignation of Pope Benedict, the papal conclave that elected Cardinal Jorge Mario Bergoglio, and the instillation of Pope Francis. In 2007 the Catholic Press Association awarded him the St. Francis de Sales Award, the highest honor given by the Catholic press. He lives in Bemidji, Minnesota.
Loading...
or
Not Currently Available for Direct Purchase