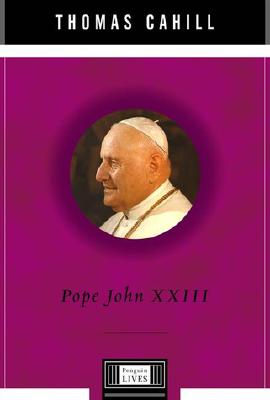 Acclaimed not only for its "grace, skill and erudition," (The Washington Post) but also for its warm, engaging narrative, Thomas Cahill's Hinges of History series humanized the history of both the Jewish and the Irish people. In Pope John XXIII, he combines his remarkable insight and knowledge to portray this legendary and beloved pontiff.

Pope John XXIII opens with a concise but sweeping history of the Catholic Church and the papacy, culminating in the brief but unforgettable reign of Angelo Giuseppe Roncalli as Pope John XXIII, in the mid-twentieth century. At seventy-six years of age, neither an intellectual nor a highly trained theologian, he was at first regarded as a transitional pope. During his reign, however, he awed the world with the seminal and unprecedented change he brought about in his concern for the fundamental plight of humankind.

In rich, impassioned prose, Cahill follows Roncalli's life from his peasant roots to his landmark Second Vatican Council, with its emphasis on worldwide social justice, which marked the beginning of a true shift in the Catholic Church and its relationship to the modern world. In a biography that will captivate Catholics and non-Catholics alike, Cahill's signature blend of interpretive insight and scholarship mirrors Pope John's own intuition, spontaneity, and all-embracing vision.