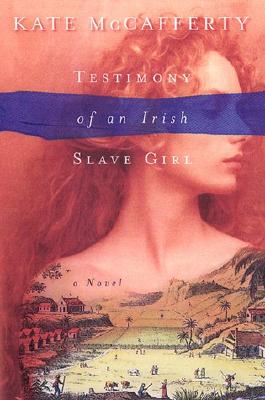 Testimony of an Irish Slave Girl

In 1651, ten-year-old Cot Daley is kidnapped from her home in Galway, Ireland and taken to Barbados. She is just one of more than 50,000 Irish who were sold as indentured servants to the plantation owners of the Caribbean, who worked them alongside the African slaves. Some of these Irish servants were young children snatched from the streets and spirited away on slave ships never to see their families again. In Testimony of an Irish Slave Girl, Kate McCafferty brilliantly re-creates this little known part of history through the remarkable life of Cot Daley.

After surviving a failed rebellion in which the black and Irish slaves conspired to overthrow their masters, Cot has been called in for questioning by Peter Coote, a disenchanted British doctor who has sold his soul to the governor of the island. She agrees to give her account of the uprising but only as part of her life story, wanting to set the record straight for posterity. As Coote begins to record the testimony of Cot Daley, whom he refers to as "the biddy" and "the white woman," what unfolds is the story of her amazing life-the brutal journey to Barbados, her harrowing years as a slave, her marriage to an African slave and rebel leader, and the fate of her children. It is both the story of an exceptional woman and a profound novel about the relations between slaves and their masters, imagined with power and passion.

Brilliantly researched and beautifully written, Testimony of an Irish Slave Girl will captivate readers of Irish and African-American history as well as lovers of literary fiction.