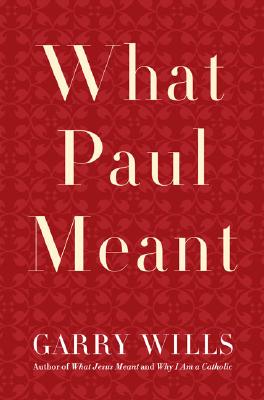 In his New York Times bestseller What Jesus Meant, Garry Wills offered a fresh and incisive reading of Jesus' teachings. Now Wills turns to Paul, whose writings have provoked controversy throughout Christian history. Upending many common assumptions, Wills argues eloquently that what Paul meant was not something contrary to what Jesus meant. Rather, the best way to know Jesus is to discover Paul. In this stimulating and masterly analysis, Wills illuminates how Paul, writing on the road and in the heat of the moment, and often in the midst of controversy, galvanized a movement and offers us the best reflection of those early times.

Garry Wills is one of the most respected writers on religion today. He is the author of Saint Augustine's Childhood, Saint Augustine's Memory, and Saint Augustine's Sin, the first three volumes in this series, as well as the Penguin Lives biography Saint Augustine. His other books include "Negro President" Jefferson and the Slave Power, Why I Am a Catholic, Papal Sin, and Lincoln at Gettysburg, which won the Pulitzer Prize.
Loading...
or
Not Currently Available for Direct Purchase