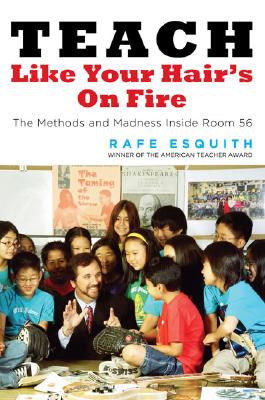 The Methods and Madness Inside Room 56

Read Rafe Esquith's posts on the Penguin Blog.
From one of America's most celebrated educators, an inspiring guide to transforming every child's education
In a Los Angeles neighborhood plagued by guns, gangs, and drugs, there is an exceptional classroom known as Room 56. The fifth graders inside are first-generation immigrants who live in poverty and speak English as a second language. They also play Vivaldi, perform Shakespeare, score in the top 1 percent on standardized tests, and go on to attend Ivy League universities. Rafe Esquith is the teacher responsible for these accomplishments.

From the man whom The New York Times calls a genius and a saint comes a revelatory program for educating today's youth. In Teach Like Your Hair's on Fire , Rafe Esquith reveals the techniques that have made him one of the most acclaimed educators of our time. The two mottoes in Esquith's classroom are Be Nice, Work Hard, and There Are No Shortcuts. His students voluntarily come to school at 6:30 in the morning and work until 5:00 in the afternoon. They learn to handle money responsibly, tackle algebra, and travel the country to study history. They pair Hamlet with rock and roll, and read the American classics. Teach Like Your Hair's on Fire is a brilliant and inspiring road map for parents, teachers, and anyone who cares about the future success of our nation's children.


Praise For Teach Like Your Hair's on Fire: The Methods and Madness Inside Room 56…

“Rafe Esquith is my only hero.”—Sir Ian McKellan

“Politicians, burbling over how to educate the underclass, would do well to stop by Rafe Esquith’s fifth grade class as it mounts its annual Shakespeare play. Sound like a grind? Listen to the peals of laughter bouncing off the classroom walls.”—Time

“Esquith is a modern-day Thoreau, preaching the value of good work, honest self-reflection, and the courage to go one’s own way.”—Newsday

Rafe Esquith has taught at Hobart Elementary School for twenty-two years. He is the only teacher in history to receive the National Medal of Arts. He has also been made a Member of the British Empire by Queen Elizabeth. His many other honors include the American Teacher Award, Parents magazine s As You Grow Award, Oprah Winfrey s Use Your Life Award, and the Compassion in Action Award from the Dalai Lama. He lives in Los Angeles with his wife, Barbara Tong. Read CBS's news story on Rafe Esquith."
Loading...
or
Not Currently Available for Direct Purchase