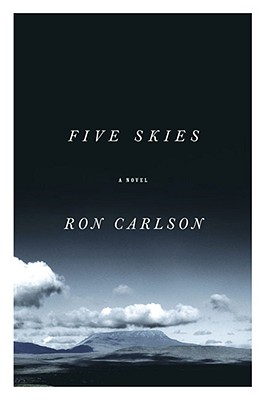 Beloved story writer Ron Carlson's first novel in thirty years, Five Skies is the story of three men gathered high in the Rocky Mountains for a construction project that is to last the summer. Having participated in a spectacular betrayal in Los Angeles, the giant, silent Arthur Key drifts into work as a carpenter in southern Idaho. Here he is hired, along with the shiftless and charming Ronnie Panelli, to build a stunt ramp beside a cavernous void. The two will be led by Darwin Gallegos, the foreman of the local ranch who is filled with a primeval rage at God, at man, at life.

As they endeavor upon this simple, grand project, the three reveal themselves in cautiously resonant, profound ways. And in a voice of striking intimacy and grace, Carlson's novel reveals itself as a story of biblical, almost spiritual force. A bellwether return from one of our greatest craftsmen, Five Skies is sure to be one of the most praised and cherished novels of the year.

Why has Ron Carlson titled the novel Five Skies? Why does Arthur Key tell Harry, when he asks what it’s like in Idaho, “There’s five skies, Harry. . . . There’s five skies every day” (p. 236)?

SPOILER ALERT: At the beginning of the job, Arthur tells Darwin that the plans “are wrong from top to bottom. But it doesn’t matter, does it? I mean, somebody’s going to get killed out here. . . . Right here. That’s all this means” (p. 20). Why does Key feel so strongly that someone will be killed here? Is Ronnie’s death in some sense fated? Is his death sacrificial?

When Key tells Ronnie “We’ll have a little supper here and then find [Traci] so you can give her your note, and we’ll go back to camp and work another week,” the narrator comments that “the sentence sounded like good work itself, sane and filled with promise” (p. 150). What is it about “good work,” a job done right, that is so satisfying in the novel? In what ways is work “sane and full of promise” for Ronnie, Darwin, and Key? What does it give them? In what ways is the novel itself both a story about and an embodiment of “good work”?

Why is it so difficult for Arthur to tell his story? Why does he feel “simplified and quiet” (p. 194) after he finally does tell it to Darwin?

How do each of the main characters—Key, Darwin, and Ronnie—change over the course of the novel? In what subtle ways do they help one another?

SPOILER ALERT: After Key burns down the ramp that they’ve spent all summer building, Darwin asks him, “What did you do?” Key replies: “Woke up” (p. 238). What does he mean by this? What kind of awakening has he experienced? In what sense was he asleep, or dreaming, before this moment? How are we to understand Key’s waking in relation to Darwin’s statement, farther down the same page, that Ronnie “didn’t wake up”?

Does Arthur Key attain a kind of redemption at the end of the novel? Has he forgiven himself for his brother’s death and his own adultery?

SPOILER ALERT: When the promoters say that the jump will happen “barring an act of God,” Key says, “He doesn’t act out here. It’s just us” (p. 188). Yet when he burns down the stunt ramp, Key thinks to himself that “this was already an act of God, regardless of the weather” (p. 233). How are we to understand these two statements? How do Darwin and Key feel about God?

What does Five Skies as a whole suggest about the relationship among grief, memory, work, talk, and friendship?