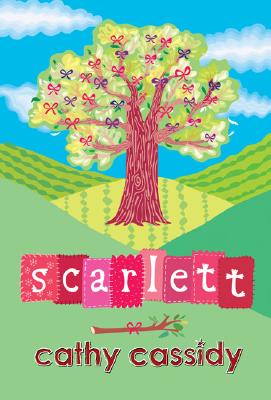 Scarlett's in trouble at school. Again. With black fingernails and dyed ketchup-red hair, she's not your average twelve-year-old Londoner. So her mum sick of trying to get her into "another" school ships Scarlett to her father's cottage in Ireland. Having to learn Gaelic in a one-room schoolhouse and enduring a new stepmum and younger stepsister is just too much. Scarlett wants to leave until she meets Kian. He seems too good to be true with his dark, rugged looks, kind nature, and horse named Midnight. As Kian helps Scarlett let go of her anger, she begins to accept her family, her friendships, and most of all, her dreams. A captivating new novel from a writer reviewers have called "a British import with a refreshingly light touch." " School Library Journal" on "Indigo Blue.

Cathy Cassidy has been writing ever since she can remember. She went to art school in Liverpool, England, before getting a job as fiction editor at a British teen mag where she loved every minute of it! Later, she got married and had a big party with fireworks and a chocolate wedding cake, before switching careers to become an art teacher. Several years and two children later, a friend talked Cathy into finishing a children's novel she'd started... and this is the result! Cathy lives in south-west Scotland with her husband Liam, two children, three cats, two rabbits, and a skinny, hairy dog named Kelpie, who was the model for Leggit in Dizzy. She still teaches art two days a week and writes the problem page for a British teen magazine. You can find out more about Cathy by checking out her website and watch out for her next book, Indigo Blue. "
Loading...
or
Not Currently Available for Direct Purchase