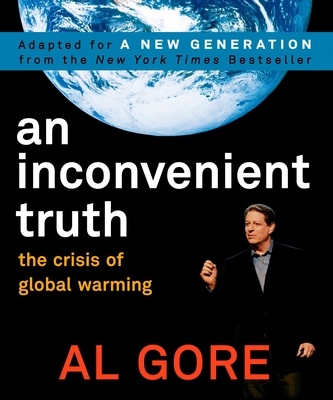 The Crisis of Global Warming

Former Vice President Al Gore's New York Times #1 bestselling book is a daring call to action, exposing the shocking reality of how humankind has aided in the destruction of our planet and the future we face if we do not take action to stop global warming. Now, Viking has adapted this book for the most important audience of all: today's youth, who have no choice but to confront this climate crisis head-on.

Dramatic full-color photos, illustrations, and graphs combine with Gore's effective and clear writing to explain global warming in very real terms: what it is, what causes it, and what will happen if we continue to ignore it. An Inconvenient Truth will change the way young people understand global warming and hopefully inspire them to help change the course of history.


Praise For An Inconvenient Truth: The Crisis of Global Warming…

“Using easy-to-grasp graphics and revealing before-and-after photos, [Gore] shows how glaciers and ice shelves are disappearing all over the globe with alarming speed, pointing to profound climate changes and increased danger from rising sea levels in the near future. He writes measured, matter-of-fact prose, letting facts and trends speak for themselves–but, suggesting that “what happens locally has worldwide consequences,”—School Library Journal, starred review

Former Vice President Al Gore is currently the chairman of both Current TV and Generational Investment Management. He was elected to the U.S. House of Representatives in 1976 and the U.S. Senate in 1984 and 1990, and served eight years as vice president of the United States, from 1993 to 2000. He is the author of the 1992 bestseller Earth in the Balance: Ecology and the Human Spirit. He lives with his wife, Tipper, in Nashville, Tennessee.
Loading...
or support indie stores by buying on