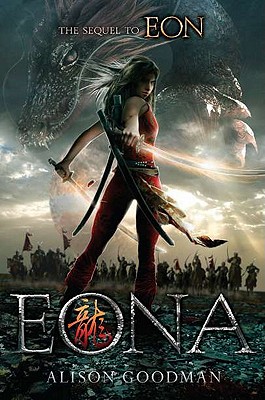 “When you've been anticipating a book as much as I have this one, there's a good chance that you will be disappointed. Happily, Goodman's sequel to the stellar Eon definitely does not disappoint! Facing the ultimate battle for control of the land she calls home, Eona finds herself waging an internal battle every bit as devastating as the war threatening to break out across the kingdom. Goodman's characters and her world-building talents are exceptionally strong, and I was very sorry to see this saga end.”
— Billie Bloebaum, Powell's Books At PDX, Portland, OR
View the List

Eon has been revealed as Eona, the first female Dragoneye in hundreds of years. Along with fellow rebels Ryko and Lady Dela, she is on the run from High Lord Sethon's army. The renegades are on a quest for the black folio, stolen by the drug-riddled Dillon; they must also find Kygo, the young Pearl Emperor, who needs Eona's power and the black folio if he is to wrest back his throne from the selfstyled "Emperor" Sethon. Through it all, Eona must come to terms with her new Dragoneye identity and power - and learn to bear the anguish of the ten dragons whose Dragoneyes were murdered. As they focus their power through her, she becomes a dangerous conduit for their plans. . . .

Eona, with its pulse-pounding drama and romance, its unforgettable fight scenes, and its surprises, is the conclusion to an epic only Alison Goodman could create.

Alison Goodman, in addition to the Eon/Eona duology, is also the author of Singing the Dogstar Blues and the adult science fiction thriller Killing the Rabbit. She lives with her husband and their hyperactive Jack Russell terrier in Australia.
Loading...
or
Not Currently Available for Direct Purchase