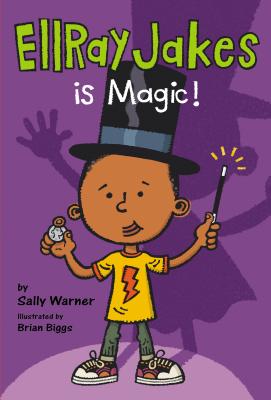 When EllRay and his friends hear about the school talent show, they’re not impressed. They’re too old for that stuff. But Mrs. Sanchez their teacher isn’t so quick to let her students off the hook. Five students MUST try-out, and EllRay somehow ends up being one of them. Now he must figure out something he’s talented at….like, maybe magic?

With some unexpected help from his dad, a scientist, EllRay begins to realize that he does have talent and brains, after all. And, most of all, that he has more in common with his dad than he thought.

Praise For EllRay Jakes Is Magic…

PRAISE FOR THE ELLRAY JAKES SERIES:

“Warner is a dead-on observer of playground politics, and has a great ear for dialogue.” —School Library Journal on EllRay Jakes Is Not a Chicken!

“…ideal for reluctant readers.” —Booklist on EllRay Jakes Is Not a Chicken!

“Young readers can identify with EllRay, who is neither a bad seed nor a goody-two-shoes; he and his sense of humor are just right.” —Kirkus on EllRay Jakes Is a Rock Star!

Sally Warner (www.sallywarner.com) grew up in Connecticut and California. She then received her B.A. degree from Scripps College, and her B.F.A. and M.F.A. degrees in fine arts from Otis Art Institute. She worked as an artist (primarily charcoal drawings) for many years, exhibiting her work at galleries, small museums, colleges, and universities across the country. In 1995 she published her first book for young readers, and since then she has published more than 20 novels.

Brian Biggs (www.mrbiggs.com) was born in Arkansas in 1968, moved to Texas in 1979, fled to New York City in 1987 to attend Parsons School of Design, lived in Paris France for a few years, ran away to San Francisco in 1993, and since 1999 he has lived in Philadelphia. Brian illustrated the covers for the first three EllRay Jakes books and also illustrates the Roscoe Riley series for HarperCollins. For more fascinating information about Brian, visit www.mrbiggs.com.
Loading...
or
Not Currently Available for Direct Purchase