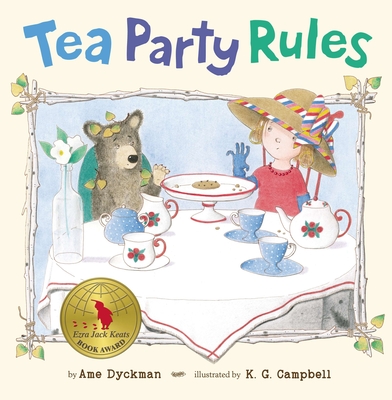 An award-winning book by a New York Times bestselling author!

When he follows his nose through the woods, Cub discovers a backyard tea party…with cookies!  He is just about to dig in when the hostess of the tea party shows up. And she has several strong opinions on how Tea Party must be played. Cub tries to follow her rules . . . but just how much can one bear take, even for cookies?

A laugh-out-loud funny look at the required give-and-take of playtime, Tea Party Rules is an eventual friendship story that will delight grubby cubs, fancy girls, and cookie lovers everywhere.

* "Dyckman’s (Boy and Bot) and Campbell’s (Flora and Ulysses) story is like a pretty petit four with an unexpectedly zingy filling."--Publishers Weekly, starred review

* "Dyckman (Boy and Bot, 2012) and Campbell (Flora and Ulysses, 2013) are a winning pair, using their comedic chops to pace the story beautifully. . . . This battle of wills between two charmers hits just the right note."--Booklist, starred review,

Ame Dyckman writes picture books, hula hoops, and puts coins in people's parking meters. She lives in New Jersey with her family and pets: black cats, hermit crabs, fish, and a demanding-but-adorable squirrel named Willie. She is the author of Boy and Bot, about which The New York Times wrote, "It's simply impossible to imagine . . . not wanting to be friends with this book," as well as Tea Party Rules, winner of the Ezra Jack Keats New Writer Award.  Follow Ame on Twitter @AmeDyckman.
Loading...
or support indie stores by buying on