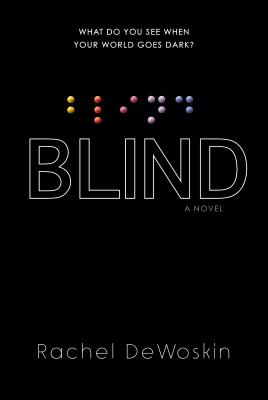 When Emma Sasha Silver loses her eyesight in a nightmare accident, she must relearn everything from walking across the street to recognizing her own sisters to imagining colors. One of seven children, Emma used to be the invisible kid, but now it seems everyone is watching her. And just as she’s about to start high school and try to recover her friendships and former life, one of her classmates is found dead in an apparent suicide. Fifteen and blind, Emma has to untangle what happened and why—in order to see for herself what makes life worth living.

Unflinching in its portrayal of Emma’s darkest days, yet full of hope and humor, Rachel DeWoskin’s brilliant Blind is one of those rare books that utterly absorbs the reader into the life and experience of another.

"With traces of John Green’s Looking for Alaska. . . a vivid, sensory tour of the shifting landscapes of blindness and teen relationships" —Kirkus, starred review

"A well-researched and much-needed story. Emma is a capable heroine who manages her disability with realism and  grace." —School Library Journal

"The vivid text and the colorful descriptions allow the reader to imagine how and what a blind person sees. . . DeWoskin tells her tale with humor, hope, and powerful reality." —LMC

"Blind. . . allow[s] readers to inhabit another person’s soul so fully that they will be unable to separate the heroine’s pain from their own and become a little less blind to human suffering. . . for sheer emotional profundity and the elusive feeling of living another person's experience through fiction, DeWoskin is hard to beat." —SF Weekly

“Blind is soon to be on the tips of everyone’s tongues.” —Bustle.com, August 2014's Best YA Books

“Amusing, hypnotic . . . Like a contemporary version of The Wizard of Oz or its coming-of-age antecedent, Alice in Wonderland, Judy’s experiences of adolescence are exhilarating, terrifying, and almost uniformly surreal. —Time Out (New York) on Big Girl Small

“Cultures don’t so much collide as coalesce in DeWoskin’s sparkling debut novel . . . Infusing her multicultural narrative with vibrant observations that glitter with laser-intense acuity, DeWoskin demonstrates a smart, sophisticated literary agility.” —Booklist, starred review, on Repeat After Me

“A tender story of manic love and loss, this is a heartbreaking and uplifting novel with memorably off-kilter leads.” —Publishers Weekly on Repeat After Me

Rachel DeWoskin spent her twenties in China as the unlikely star of a nighttime soap opera that inspired her memoir Foreign Babes in Beijing. She has written two novels, Repeat After Me, and Big Girl Small, the coming of age story of a sixteen-year-old with dwarfism. Big Girl Small received the American Library Association’s Alex Award, and Rachel’s conversations with young readers inspired her to write her first YA novel, Blind. Rachel lives in Chicago and Beijing with her husband, playwright Zayd Dohrn, and their two little girls.
Loading...
or
Not Currently Available for Direct Purchase