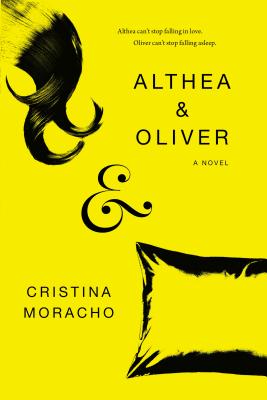 What if you live for the moment when life goes off the rails—and then one day there’s no one left to help you get it back on track?

Althea Carter and Oliver McKinley have been best friends since they were six; she’s the fist-fighting instigator to his peacemaker, the artist whose vision balances his scientific bent. Now, as their junior year of high school comes to a close, Althea has begun to want something more than just best-friendship. Oliver, for his part, simply wants life to go back to normal, but when he wakes up one morning with no memory of the past three weeks, he can’t deny any longer that something is seriously wrong with him. And then Althea makes the worst bad decision ever, and her relationship with Oliver is shattered. He leaves town for a clinical study in New York, resolving to repair whatever is broken in his brain, while she gets into her battered Camry and drives up the coast after him, determined to make up for what she’s done.

Their journey will take them from the rooftops, keg parties, and all-ages shows of their North Carolina hometown to the pool halls, punk houses, and hospitals of New York City before they once more stand together and face their chances. Set in the DIY, mix tape, and zine culture of the mid-1990s, Cristina Moracho’s whip-smart debut is an achingly real story about identity, illness, and love—and why bad decisions sometimes feel so good.

"The bittersweet romance, Oliver’s battle with his illness, and Althea’s coming-of-age struggle should appeal to fans of John Green and Sarah Dessen who are looking for something new." —VOYA

"Fans of Rainbow Rowell's Eleanor and Park will enjoy debut author Cristina Moracho’s trip back to the 1990s in Althea and Oliver." —CNN.com

"It is the exquisitely created and painfully real, pitch-perfect characters who make it so memorable." —SLJ, starred review

"At turns gritty and gooey, Oliver and Althea’s evolving relationship unfolds in a warts-and-all narration that alternates between the two, deftly capturing the purgatorial crossroads between youth and adulthood . . . Mesmerizing." —Kirkus Reviews, starred review

"Can boys and girls really be just friends? This endearing novel explores that, and a whole lot of other things including but not limited to: falling in love, punk rock, circa-’90s NYC, and a very complicated sleep disorder that causes those afflicted to fall asleep for days, weeks, even months at a time." —TeenVogue.com

"A gorgeous, glorious, unforgettable novel about punk rock, bad decisions, falling in love, and the messy beauty of growing up. Althea and Oliver is a flawlessly-crafted straight shot to the heart." —Sarah McCarry, author of All Our Pretty Songs

"Marrying dazzling prose and sharp-eyed realism, Althea & Oliver is a gritty, sparkling triumph. It's everything a novel is meant to be." —Bennett Madison, author of September Girls

It's very rare to come across either a book or two young protagonists as appealing and insightful as Althea & Oliver. Big-hearted and wiseassed and penetratingly smart, they experience growing up as a time machine that's whisked them into a future they don't want, even as they're dying to know what's out there." —Jim Shepard, author of Project X and You Think That's Bad

"I can't wait to tell people about this one. It's mind-blowingly good." —Molly Templeton, WORD Books

"Even if the book weren’t eloquent and hilarious, it’d be a must-read for all children of the ’90s. But thankfully, it is, and if you’re smart, you’ll run out and grab a copy."  —Bustle

A TIME Magazine Top 10 YA of 2014
An SLJ Best Books of the Year
A Booklist Editor's Choice 2014
A Kirkus Reviews Best Books of 2014
One of TeenVogue.com’s Best YA Books You Should Read This Fall
One of CNN.com’s 40 New Titles to Feed Your YA Book Addiction

This is Cristina Moracho's first novel. She lives in Brooklyn, New York and tweets at @cherielecrivain.
Loading...
or
Not Currently Available for Direct Purchase