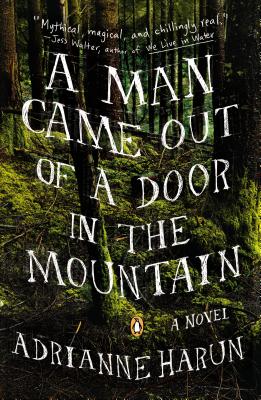 “Harun is heir apparent to Louise Erdrich and Harry Crews.... Readers will be swept away by this breathless, absorbing novel.” —Claire Vaye Watkins, The New York Times Book Review

In this mysterious and chilling novel, girls, mostly Native, are vanishing from the sides of a notorious highway in the isolated Pacific Northwest. Leo Kreutzer and his friends are barely touched by these disappearances—until a series of enigmatic strangers arrive in their remote mountain town, beguiling and bewitching them. It seems as if the devil himself has appeared among them.

The intoxicatingly lush debut novel by the acclaimed author of The King of Limbo, A Man Came Out of a Door in the Mountain is an unsettling portrait of life in a dead-end town, as seductive and beautifully written as the devil’s dark arts are wielded.

WINNER OF THE 2015 PINCKLEY PRIZE FOR DEBUT CRIME NOVEL

â€œReaders will be swept away by this breathless, absorbing novelâ€¦.A Man Came Out of a Door in the Mountain proves that Harun is heir apparent to Louise Erdrich and Harry Crews.... A mesmerizing incantation, harrowing and hypnotic.â€

â€œAn ingenious tale of myth, magic and murderâ€¦.told in rich proseâ€¦.[An] auspicious debut.â€ --Seattle Times
Â
â€œHypnotic...tantalizing...lush and evocative...Literary and genre lovers alike can find a striking new voice to celebrate in A Man Came Out of A Door in the Mountain.â€
--Kansas City Star

â€œA Man Came Out of a Door in the Mountain is literary magic of the highest orderâ€¦.It reads with the level care of a finely crafted storyâ€¦but also with the fresh familiarity of a folksongâ€¦.A spectacular read.â€
--The Vancouver Sun
Â
â€œHaunting [and] hypnotic.â€
--SeattleÂ Magazine


â€œInÂ mesmerizingÂ prose, debut novelist Harun spins a chilling tale shot through with both aching realism and age-old folktales, melding them together to capture a landscape lush with possibility and imagination and terrifying in its vast emptiness.â€
Â --Booklist, starred review

â€œIntertwining with real-world pain and loss, this debut novel gains an extra sense of risk and realism, pitting ordinary, human evil against supernatural wickedness.â€
--The Globe and Mail
Â
â€œMuch as it does to the novelâ€™s characters, the gothic ambiance wraps around the reader and wonâ€™t let go.â€
--Library Journal
Â
â€œHarun creates a masterfully bleak and spooky mood, and succinctly captures the desperation of the young peopleâ€™s livesâ€¦[a] promising debut.â€
--Publishers Weekly
Â
â€œThrough a complex narrative structure, Harun [invests] all of her actionâ€¦with an aura of myth and folk legend.â€
--Kirkus Reviews

Adrianne Harun teaches at the Rainier Writing Workshops, an MFA program at Pacific Lutheran University, and is the author of the acclaimed short story collection The King of Limbo. She lives in Port Townsend, Washington.
Loading...
or
Not Currently Available for Direct Purchase