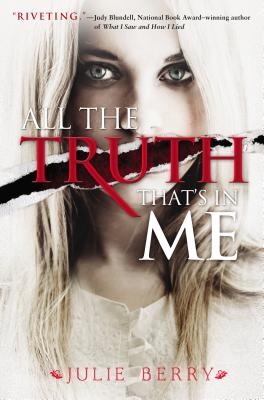 Unable to speak, Judith lives like a ghost in her own home, silently pouring out her thoughts to the boy who’s owned her heart as long as she can remember—even if he doesn’t know it—her childhood friend, Lucas.

This startlingly original novel will shock and disturb you; it will fill you with Judith’s passion and longing; and its mysteries will keep you feverishly turning the pages until the very last.

Praise for ALL THE TRUTH THAT'S IN ME by Julie Berry:

Julie Berry grew up on a farm in western New York as the youngest of a family of seven book-loving kids. She holds a BS from Rensselaer Polytechnic Institute in communication and an MFA from Vermont College in writing for children and young adults. She now lives in eastern Massachusetts with her husband, four young sons, and two cats. She is the author of six critically acclaimed books for young readers. All the Truth That’s in Me is her first novel for teens and adults. Visit her at julieberrybooks.com.
Loading...
or
Not Currently Available for Direct Purchase