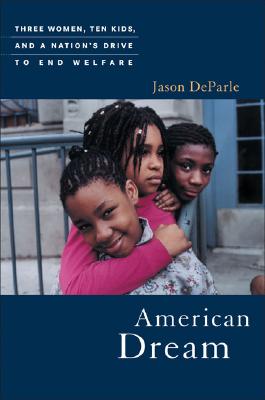 Bill Clinton vowed to "end welfare as we know it" in his first run for president in 1992. Four years later, Congress translated a catchy slogan into a law that sent nine million women and children streaming from the rolls. Did it work? In his definitive book on this unprecedented upheaval in social policy, New York Times reporter and two- time Pulitzer Prize finalist Jason DeParle follows three women in one extended family to a set of surprising answers.

Cutting between the corridors of Washington and the meanest streets of Milwaukee, DeParle tracks the story from the White House to the local crack house. After twelve years on welfare, Angie, a truculent mother of three, finds a job and a 401(k)-- and a boyfriend who tries to shoot her. Her cousin Jewell, glamorous even in sweatpants, adores the children she struggles to support. Opal combines an antic wit with an appetite for cocaine while the welfare agency that is supposed to help her squanders its millions. Drawing on more than a decade of reporting, DeParle traces their story back six generations to a common ancestor--a Mississippi slave--and adds politicians, case workers, reformers, and rogues to an epic exploration of America's struggle with poverty and dependency.