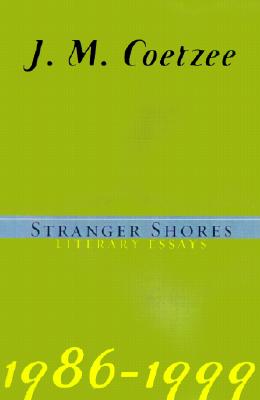 The only author ever to win the Booker Prize twice, J. M. Coetzee is, without question, one of the world's greatest novelists. Now his many admirers will have the pleasure of reading his significant body of literary criticism. This volume gathers together for the first time in book form, twenty-six pieces on books and writing, all but one previously published. Stranger Shores opens with "What is a Classic?" in which Coetzee explores the answer to his own question-"What does it mean in living terms to say that the classic is what survives?"-by way of T. S. Eliot, Johann Sebastian Bach and Zbigniew Herbert. His subjects range from the great eighteenth and nineteenth century writers Daniel Defoe, Samuel Richardson and Ivan Turgenev, to the great German modernists Rilke, Kafka, and Musil, to the giants of late twentieth century literature, among them Harry Mulisch, Joseph Brodsky, Jorge Luis Borges, Salman Rushdie, Amos Oz, Naguib Mahfouz, Nadine Gordimer, and Doris Lessing.