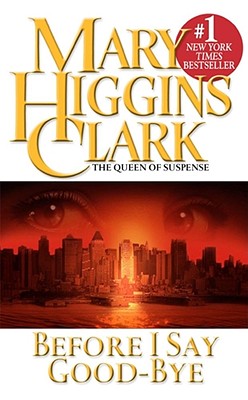 Before I Say Good-Bye

A young woman probing into the mysterious circumstances of her husband's death receives a message from a medium claiming to be his channel in Mary Higgins Clark's #1 bestselling thriller, Before I Say Goodbye.

When Nell MacDermott learns that her husband, architect Adam Cauliff, and three of his business associates have died in an explosion of his new cabin cruiser, she is not only devastated but wracked with guilt. The last time she saw Adam, they had a bitter quarrel over her plan to run for the congressional seat long held by her grandfather; she had told him not to come home.

As the investigation into the boat's explosion proceeds, Nell learns that it was not an accident but a bomb. Despite her skepticism, Nell is swayed by her great-aunt Gert, a believer in psychic powers, to see a medium claiming to be Adam's channel.

While trying to unravel the threads of Adam's past and his violent end, Nell consults the medium, who transmits messages to her with instructions from Adam. The story reaches a powerful climax in Nell's final encounter with the medium, in which she learns the truth about the explosion -- truth she can't be allowed to live and tell.

Praise For Before I Say Good-Bye…

Publishers Weekly Romantic suspense has no more reliable champion than Mary Higgins Clark. Her characters are...breezy and fun, and so is this confection of a book.

Los Angeles Times For someone who loves plot, Mary Higgins Clark's Before I Say Good-bye should be like manna from heaven....America's "Queen of Suspense" clearly knows what her readers want. Here she provides it, in spades.

The Hartford Courant(CT) The storytelling skills of the newest grand master of mystery writing have never been better.

The Christian Science Monitor Clark holds the reins the whole way through this tale of mischief and secrets, allowing us to unwind her labyrinth of hidden clues only as she wants them to unfold.

The Knoxville News-Sentinel(TN) Hard to put down....It's what a vacation book should be.

Tulsa World(OK) Yet another pearl Clark can add to her worldwide bestsellers.

Midwest Book Review Fun and exciting....Clark provides her myriad of fans with another enthralling tale filled with action and adventure.

The Anniston Star (AL) Fascinating enough that I read it through in one sitting....Well worth reading for all your mystery fans.