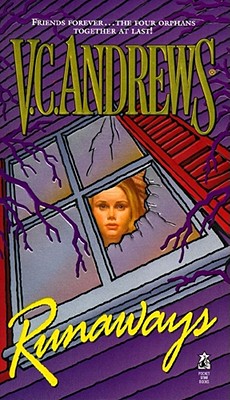 The spellbinding Orphans series concludes in this thrilling new novel from V.C. Andrews®...
"All for one and one for all" was the girls' motto. In the grim foster home for orphans run by Louise and Gordon Tooey, at least Brooke, Crystal, Raven, and Butterfly had each other. Calling themselves "sisters," together they could forget the past and dream of a new chance...a real home. Then they discovered a secret even more haunting than Gordon's heavy boots pounding on the wooden floors. Their fragile hopes of a better life shattered, they escaped the only way they could. Soon they were runaways in a borrowed car, desperately wishing to wake up one morning in a place of sunshine and love.
Raven hoped to be a singer, Butterfly wanted to be a dancer, Crystal planned for college, and Brooke privately hoped to find her mother in California. On the open road the chains of sadness that had bound them seemed to melt away, and the kindness of strangers made a secure future seem almost real. But the highway was a dangerous place, and soon they were penniless and more vulnerable than ever. Alone under the wide western sky, they had only each other to ask if they should give up their dreams...or if they were really halfway to a haven of safety and happiness....