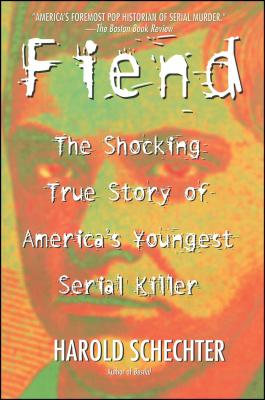 A MONSTER PREYED UPON THE CHILDREN OF NINETEENTH-CENTURY BOSTON. HIS CRIMES WERE APPALLING -- AND YET HE WAS LITTLE MORE THAN A CHILD HIMSELF.

When fourteen-year-old Jesse Pomeroy was arrested in 1874, a nightmarish reign of terror over an unsuspecting city came to an end. "The Boston Boy Fiend" was imprisoned at last. But the complex questions sparked by his ghastly crime spree -- the hows and whys of vicious juvenile crime -- were as relevant in the so-called Age of Innocence as they are today.
Jesse Pomeroy was outwardly repellent in appearance, with a gruesome "dead" eye; inside, he was deformed beyond imagining. A sexual sadist of disturbing precocity, he satisfied his atrocious appetites by abducting and torturing his child victims. But soon, the teenager's bloodlust gave way to another obsession: murder.
Harold Schechter, whose true-crime masterpieces are "well-documented nightmares for anyone who dares to look" (Peoria Journal Star), brings his acclaimed mix of page-turning storytelling, brilliant insight, and fascinating historical documentation to Fiend -- an unforgettable account from the annals of American crime.

Harold Schechter is a professor of American literature and culture. Renowned for his true-crime writing, he is the author of the nonfiction books Fatal, Fiend, Bestial, Deviant, Deranged, Depraved, and, with David Everitt, The A to Z Encyclopedia of Serial Killers. He is also the author of Nevermore and The Hum Bug, the acclaimed historical novels featuring Edgar Allan Poe. He lives in New York State.
Loading...
or support indie stores by buying on