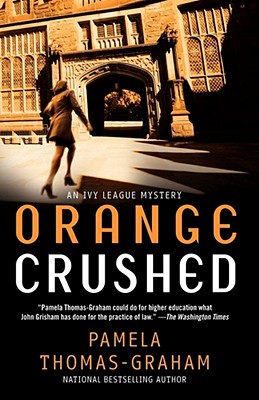 Pamela Thomas-Graham's beguiling and atmospheric Ivy League novels simmer with hot button issues -- and unveil layers of malice and murder inside the life academic. Harvard economics professor Nikki Chase is intent on becoming the first tenured African-American woman in her department. But with her affinity for solving crimes, she may make her name in a place where the highest levels of human intellect can court the lowest impulses of the human heart.

A working weekend at a Princeton conference is just what Nikki needs to deflect the pre-holiday pressures -- both professional and personal -- that are closing in on her back in Cambridge. And there will be down time, too, at a party honoring professor Earl Stokes, her old friend and mentor. Rumors abound that Stokes, a Princeton superstar, may depart for Harvard, a change that would stir up as much controversy as his new bestselling book on race issues. When Stokes's body is discovered among the smoldering ruins of the not-yet-completed black-studies building, a shattered Nikki refuses to accept the police findings that the death was accidental. And among the ashes she will uncover a murderous agenda with ominous implications for not only the Princeton campus but Harvard as well.

"Pamela Thomas-Graham could do for higher education what John Grisham has done for the practice of law."
-- The Washington Times

"Thomas-Graham effortlessly reveals the inner workings of a prestigious university in a provocative novel sure to appeal well beyond the ivory tower."
-- Publishers Weekly

"Her scenes of academe's turf, gender, racial, and canon politics have the awful clink of truth."
-- The Wall Street Journal

Pamela Thomas-Graham is a Phi Beta Kappa graduate of Harvard College and a graduate of Harvard Law School and Harvard Business School. Now president and CEO of CNBC Television, she divides her time between Westchester County and Manhattan. This is her third novel.
Loading...
or support indie stores by buying on