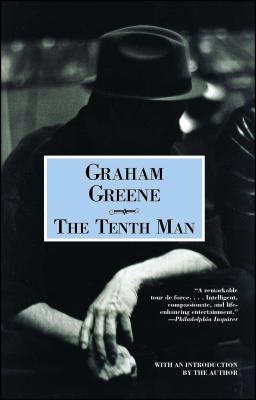 From the author of the classics Brighton Rock and The Power and the Glory, a morally complex tale about a man at the mercy of deadly forces while being held in a German prison camp during World War II. Featuring an introduction by the author and two other story ideas from his archives.

When Jean-Louis Chauvel, a French lawyer incarcerated in a German prison camp, is informed by his captors that three prisoners must die, he devises a plan for survival. Offering everything he owns to a fellow prisoner if he will take Chauvel’s place, he manages to escape the firing squad but soon discovers that he will continue to pay for this act for the rest of his life.

An unforgettable and suspenseful novel that “deserves a place at the top of the list of world’s best literature inspired by the war” (Houston Chronicle), The Tenth Man will haunt you long after you turn the final page.

Praise For The Tenth Man…

"Lean, curt, and sinister from the start....The Tenth Man goes down like caviar."
— The Village Voice

"The Tenth Man is a work of stature, a major novel of World War II that deserves a place at the top of the list of the world's best literature inspired by war."
— Houston Chronicle

"At the age of eighty, Graham Greene [was] the best writer at work in the English language....The Tenth Man is quintessential Greene, a short novel that he wrote in the 1940s for MGM as the dry run for a screenplay, and that remained untouched in a studio file until its discovery in 1983....What a plot! They don't make movies like ths anymore—or novels, either, except by Graham Greene."
— USA Today

"The Tenth Man is classical in its tragedy and its simplicity...the kind of narrative labyrinth that Greene is so justly admired for....a forceful novel....What better homage can be made to a venerable Graham Greene than to realize that even his forgotten bagatelles are wrought of the most refined gold?"
— Denver Post

"Early on in the book, one's pulse begins to quicken. The opening section is rather like a haiku, clean, wonderfully abbreviated, the pace just right."
— William Buckley,

"The Tenth Man is an excellent read, in every respect a credit to Greene. The situation, the plot, the characters all have the grainy black-and-white feel, the larger-than-life quality of a postwar movie."
— Chicago Tribune

Graham Greene was recognized as one of the leading English novelists of the twentieth century. Combining literary acclaim with widespread popularity, Greene’s best-known works include Brighton Rock, The Heart of the Matter, The Quiet American, and The Power and the Glory. In addition to his careers as a journalist and novelist, Greene also wrote screenplays with his most successful effort being The Third Man. The Tenth Man was also written during his time at MGM. He was a member of the Order of Merit and a Companion of Honour and died in 1991.
Loading...
or
Not Currently Available for Direct Purchase