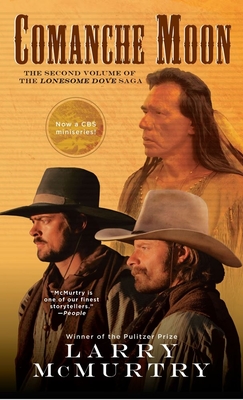 The epic four-volume cycle that began with Larry McMurty's Pulitzer Prize–winning masterpiece, Lonesome Dove, is completed with this brilliant and haunting novel—a capstone in a mighty tradition of storytelling.

Texas Rangers August McCrae and Woodrow F. Call, now in their middle years, are just beginning to deal with the enigmas of the adult heart—Gus with his great love, Clara Forsythe; and Call with Maggie Tilton, the young whore who loves him. Two proud but very different men, they enlist with a Ranger troop in pursuit of Buffalo Hump, the great Comanche war chief; Kicking Wolf, the celebrated Comanche horse thief; and a deadly Mexican bandit king with a penchant for torture.

Comanche Moon joins the twenty-year time line between Dead Man's Walk and Lonesome Dove, following beloved heroes Gus and Call and their comrades-in-arms—Deets, Jake Spoon, and Pea Eye Parker—in their bitter struggle to protect an advancing Western frontier against the defiant Comanches, courageously determined to defend their territory and their way of life.

At once vividly imagined and unflinchingly realistic, Comanche Moon is a sweeping, heroic adventure full of tragedy, cruelty, courage, honor and betrayal, and the culmination of Larry McMurty's peerless vision of the American West.

"McMurtry is one of our finest storytellers, and he's at his best here."--Kyle Smith, People

"Almost impossible to put down . . . McMurtry knows how to deploy his most suspenseful episodes for maximum effect. he treats his large cast of characters with humor and respect."--Judith Wynn, Boston Herald

"[A] fine tableau of western life, full of imaginative exploits, convincing historical background, and characters who are alive."--Kirkus Reviews

Larry McMurtry (1936–2021) was the author of twenty-nine novels, including the Pulitzer Prize–winning Lonesome Dove, three memoirs, two collections of essays, and more than thirty screenplays. He lived in Archer City, Texas.
Loading...
or support indie stores by buying on