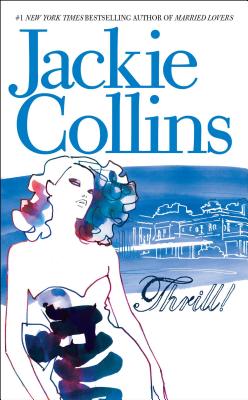 Jackie Collins' most outrageous, erotically charged New York Times bestseller is a sexy, shaterring roller-coaster thrill ride!
From chic New York and the exclusive Hamptons to the hungry heart of L.A., this high-suspense tale pulses with deadly obsessions and relentless desires in the seemingly perfect world of a gorgeous film actress. She could have any man -- but the one she can't resist is a mysterious lover with a shadowed past. As their jolting affair skyrockets with electric passion, shocking secrets break through their hidden traps -- in a brilliantly twisting story that sparks with the explosive Jackie Collins touch.

New York Post [A] sizzler....[An] expertly-crafted page-turner....By the end of Thrill!, you'll be ready for two things: a cold shower and the next Collins book.

Woman's Own [A] sexy new page-turner...fun, glamorous, and kinky.

Dayton News (OH) Rich and famous, sex and seduction...it's Jackie all the way.

Jackie Collins has been called a “raunchy moralist” by the director Louis Malle and “Hollywood’s own Marcel Proust” by Vanity Fair. With over 500 million copies of her books sold in more than forty countries, and with thirty-two New York Times bestsellers to her credit, she is one of the world’s top-selling novelists. Six of her novels have been adapted for film or TV. Collins was awarded an OBE (Order of the British Empire) by the Queen of England in 2013 for her services to literature and charity. When accepting the honor she said to the Queen, “Not bad for a school drop-out”—a revelation capturing her belief that both passion and determination can lead to big dreams coming true. She lived in Beverly Hills where she had a front row seat to the lives she so accurately captured in her compulsive plotlines. She was a creative force, a trailblazer for women in fiction, and in her own words “a kick-ass writer!” Her fascinating life as a writer and icon is explored in the CNN Films documentary Lady Boss: The Jackie Collins Story.
Loading...
or
Not Currently Available for Direct Purchase