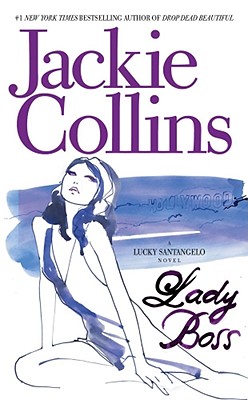 The dangerously beautiful Lucky -- star of two of Jackie Collins' previous smash, international number one bestsellers, Chances and Lucky -- returns in Lady Boss. And this time the shockingly sensual, ruthlessly clever Lucky is out to conquer Hollywood!
In Chances Lucky grew up in a top crime family. In Lucky, she was married three times. And now, in Lady Boss, she takes on Hollywood and wins!
Panther Studios is the prize and Lucky wants it... In her quest for power she meets adversaries and enemies, friends and betrayers. And her relationship with her husband, charismatic comedian and movie star, Lennie Golden is put to the test.
Lucky's first challenge is to buy the only movie studio still not controlled by a powerful conglomerate -- Panther Studios, owned by the retired, irascible, old Abe Panther. But Abe won't sell his beloved studio to Lucky until she proves she has the guts to make it in Hollywood. It's his idea that she disguise herself as a secretary and go in undercover to find out what's really going on. It's a challenge that also satisfies Lucky's passion for adventure -- and her desire to take chances...
In the process, Lucky uncovers a world of financial scheming, big-time betrayal, and bizarre sex.
Panther Studios and Lucky Santangelo... a dangerous mix...
When Lucky makes her final move, assuming the role of Lady Boss at Panther Studios, she stuns the entire industry and sets off a series of shock waves, not only threatening her marriage to Lennie, but bringing down on her head the hatred of crime boss Carlos Bonnatti -- a hatred that goes back generations, putting in peril her life, and the lives of everyone close to her!
With Lady Boss, Jackie Collins brings back one of her most intriguing and endearing characters, Lucky Santangelo. She also proves once again that she is the unquestioned queen of glamorous fiction.

Jackie Collins lived in Beverly Hills where she had a front row seat to the lives she so accurately captured in her compulsive plotlines. She was a creative force, a trailblazer for women in fiction and in her own words “A kick-ass writer!”
or support indie stores by buying on