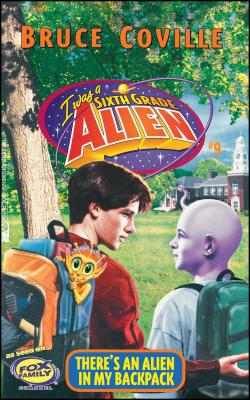 Two Feet of Trouble!
Pleskit has always said that he's not necessarily the first alien kid to go to school on Earth. He's just the only one who's doing it openly.
Tim discovers the truth of those words when he meets a two-foot-tall alien, Beebo, who is stranded here and wants desperately to get back to his own planet. Unfortunately, Beebo's presence on Earth could cause a diplomatic disaster. So Pleskit can't ask his Fatherly One for help.
And help is what the boys need, because Beebo is an imp! He's hooked on mischief, and can't resist using his powers to cause chaos in the classroom and havoc on the homefront.
Pleskit and Tim have faced plenty of alien menaces. But can they survive an incredibly cute prankster who has a genuine gift for causing the most embarrassing trouble ever?