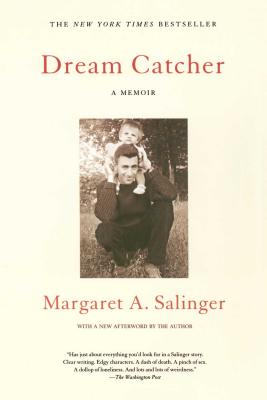 In her much-anticipated memoir, Margaret A. Salinger writes about life with her famously reclusive father, J.D. Salinger -- offering a rare look into the man and the myth, what it is like to be his daughter, and the effect of such a charismatic figure on the girls and women closest to him.
With generosity and insight, Ms. Salinger has written a book that is eloquent, spellbinding, and wise, yet at the same time retains the intimacy of a novel. Her story chronicles an almost cultlike environment of extreme isolation and early neglect interwoven with times of laughter, joy, and dazzling beauty.
Ms. Salinger compassionately explores the complex dynamics of family relationships. Her story is one that seeks to come to terms with the dark parts of her life that, quite literally, nearly killed her, and to pass on a life-affirming heritage to her own child.
The story of being a Salinger is unique; the story of being a daughter is universal. This book appeals to anyone, J.D. Salinger fan or no, who has ever had to struggle to sort out who she really is from whom her parents dreamed she might be.

Praise For Dream Catcher: A Memoir…

The Washington Post Has just about everything you'd look for in a Salinger story. Clear writing. Edgy characters. A dash of death. A pinch of sex. A dollop of loneliness. And lots and lots of weirdness.

John Leonard CBS News Sunday Morning Margaret A. Salinger has written a memoir that would break the heart even if her father weren't the reclusive author of The Catcher in the Rye. Maybe there's a gene for splendid prose.

The New York Times Salinger's daughter's truths are as mesmerizing as his fiction....There is information here that can't help altering, and enlarging, our estimation of Salinger's work....This memoir may well prompt a reassessment of the place of Salinger's fiction in American literature, and add a dimension to the marginalized mystic he's become to many.

Buffalo Art News I found myself gaining personal insights from this book that applied to me both as a son and as a father. I could not ask for much more than that. There are, I believe, lessons here for all of us.

The Telegraph (UK) Salinger's writing is vivid and strong.

USA Today An unprecedented look at one of the country's most admired and reclusive writers.

Richmond Times-Dispatch (VA) By fathering Margaret, or Peggy, America's best-known creator of precocious fictional siblings begot a daughter with a level of brilliance and moral fiber that has proved capable of taking on both the challenge of the flesh-and-blood J. D. Salinger and the mystique he has gone to vast lengths to cultivate....A master interpreter of her father's work, Peggy skillfully balances her incisive readings of the stories with her father's motives and behaviors. What makes it so remarkable is the brilliance with which, in describing the process of winning her own salvation, the author deconstructs the Salinger myth.

Academic Writing Review Margaret A. Salinger's work shows the brilliance of what can happen when a woman's way of seeing is adroitly applied to a man's writing....Rarely does a memoir do so much to make readers reconsider a body of fiction by a well-known writer....This memoir has become one of the best books to surface in the world of Salinger criticism.