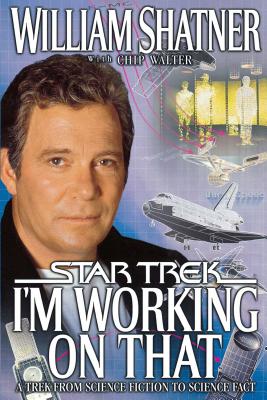 I'm Working on That (Paperback)

A Trek From Science Fiction to Science Fact (Star Trek )

"BEAM ME UP, SCOTTY."™
During the 1960s, in an age when the height of technology was a crackly AM transistor radio, Star Trek® envisioned a time when communication devices worked without wires.
"WORKING"
Computers of the decade took up entire climate-controlled rooms and belonged only to the government and a few very large corporations. Yet Captain Kirk had one small enough to sit on the top of his desk -- and it talked back to him.
"AHEAD, WARP FACTOR 2"
While man still hadn't walked on the moon, the crew of the Starship Enterprise™ traveled between star systems faster than the speed of light. Its crew was able to walk on other worlds.

Over the past three decades, Star Trek has become a global phenomenon. Its celebration of mankind's technical achievements and positive view of the future have earned it an enduring place in the world's psyche. It has inspired countless viewers to become scientists, inventors, and astronauts. And they, in turn, have wondered if they could make even a little piece of Star Trek real in their own lifetime. As one noted scientist said when he saw a plywood, plaster and plastic set that represented the ship's warp engines, "I'm working on that."

As in his missions aboard the fictional Starship Enterprise, William Shatner, the actor who is Captain James T. Kirk, and his co-author, Chip Walter, take us on an adventure to discover the people who are working on the future we will all share. From traveling through space at warp speeds to beaming across the continent, noted scientists from Caltech to MIT explore the realms of what was once considered improbable and show how it just might be possible.

William Shatner is the author of nine Star Trek ® novels, including the New York Times bestsellers The Ashes of Eden and The Return. He is also the author of several nonfiction books, including Get a Life! and I’m Working on That. In addition to his role as Captain James T. Kirk, he stars as Denny Crane in the hit television series from David E. Kelley, Boston Legal—a role for which he has won two Emmy Awards and a Golden Globe. Find more information at WilliamShatner.com.
or
Buy Here
Copyright © 2020 American Booksellers Association