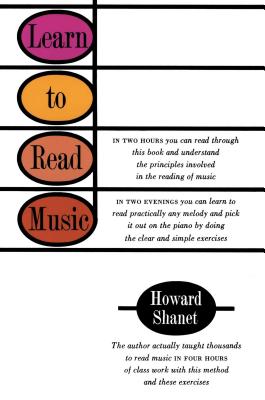 This book Will Not

But it will teach Anyone—even the tone-deaf—to read melodies and pick them out on the piano.

Howard Shanet is Associate Professor of Music at Columbia University and Conductor of the University Orchestra, which, under his guidance, has gained a reputation for the daring and unconventional programs it offers the public. He has been guest conductor of the New York Philharmonic in its Young People's series, the Boston Symphony Orchestra at Tanglewood, the CBS Symphony, and orchestras in Holland, Israel and elsewhere. Before that, he was assistant conductor to Leonard Bernstein and to the late Serge Koussevitzky.

Mr. Shanet received his training in conducting from such masters as Serge Koussevitzky, Fritz Stiedry and Rudolph Thomas; in composition from Arthur Honegger, Bohuslav Martinu and Nikolai Lopatnikoff; in musicology from Paul Henry Lang. He holds two degrees from Columbia University.

As Mr. Shanet explains in his Introduction, he taught the contents of this book to more than a thousand students when he was conductor of the symphony orchestra at Huntington, West Virginia. Since then, tens of thousands of others have taught themselves from this book, and untold numbers have learned from Mr. Shanet's television series, also called “Learn to Read Music.”
Loading...
or support indie stores by buying on