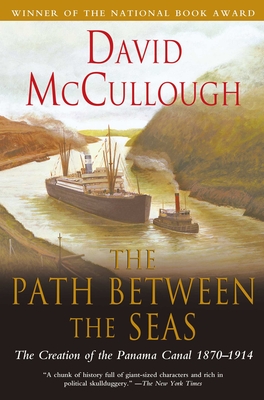 Path Between The Seas

The Washington Star David McCullough's history of this extraordinary construction job between the Atlantic and Pacific is everything history ought to be. It is dramatic, accurate...and altogether gripping.

Christopher Lehmann-Haupt The New York Times A chunk of history full of giant-sized characters and rich in political skullduggery.

The New York Daily News In the hands of McCullough, the digging of the great ditch becomes a kind of peacetime epic...The book will absorb you...You won't want to put it down once you've started reading it.

Newsweek McCullough is a storyteller with the capacity to steer readers through political, financial, and engineering intricacies without fatigue or muddle. This is grand-scale, expert work.

David McCullough (1933–2022) twice received the Pulitzer Prize, for Truman and John Adams, and twice received the National Book Award, for The Path Between the Seas and Mornings on Horseback. His other acclaimed books include The Johnstown Flood, The Great Bridge, Brave Companions, 1776, The Greater Journey, The American Spirit, The Wright Brothers, and The Pioneers. He was the recipient of numerous honors and awards, including the Presidential Medal of Freedom, the nation’s highest civilian award. Visit DavidMcCullough.com.
Loading...
or support indie stores by buying on