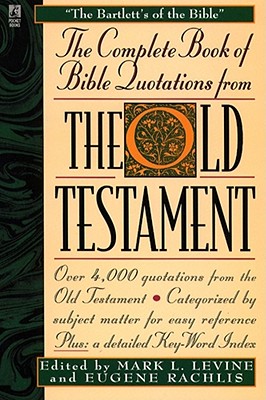 The Complete Book of Bible Quotations from the Old Testament

Mark L. Levine is a lawyer, writer, and teacher who practiced corporate banking and publishing law in New York City for over forty years. He is also an experienced voter protection lawyer. His previous books include Negotiating a Book Contract and The Complete Book of Bible Quotations. A graduate of Columbia College, NYU School of Law, and Columbia University Graduate School of Journalism, he has taught at Benjamin N. Cardozo School of Law and Zicklin School of Business/Baruch College.

Eugene Rachlis (1920–1986) was editor-in-chief and publisher of Bobbs-Merrill from 1971–1979, where his authors included Colette, Chaim Grade, Edwin Newman, and Beverly Sills. He had previously been editor-in-chief of Prentice-Hall's trade-book division. He was the author of numerous articles in national magazines and of several books. Before turning to book publishing, he was a senior editor of The New York Times Magazine and articles editor of Collier's.  A journalist during World War II, he served as press attaché for the Marshall Plan.