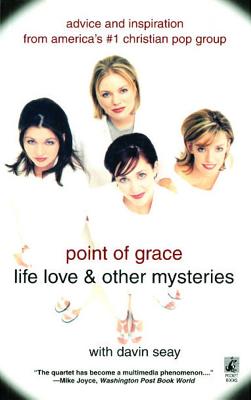 Life, Love and Other Mysteries

"We know for a fact that everyone who picks up this book is not going to believe the same things we do....All we ever want to do in our songs, in our lives, and in this book, is to let you know what God has shown us and do what we can to pass that on."
- Point Of Grace
Hailed as "the Christian Supremes" in The New York Times Magazine, the four stars of Point Of Grace are lavishly talented, tuneful, pretty, professional and one of the hottest Christian pop groups in America today. They swept the 1996 Dove Awards with four accolades: Group of the Year, Best Pop Contemporary Recorded Song, Best Pop Contemporary Album, and Best Special Event Album. Now the acclaimed musical artists - Heather Floyd, Denise Jones, Terry Jones, and Shelley Phillips - share with us the touching stories of four young girls who believed in their dreams, how their families influenced their spiritual growth as Christians, and how they came together on the road to discovery that became Point Of Grace. Revealing how God has worked through the sorrows and joys of their lives, they confide their deepest religious beliefs and their heartfelt convictions about life, love, sexual abstinence before marriage, and family. Here is their inspiring story, filled with refreshing humor, down-to-earth perceptions, old-fashioned humility, and unabashed love of God....
Iife love & other mysteries
From hilarious experiences on tour to delightful anecdotes about their daily lives, the Point Of Grace story is thoroughly entertaining. It's equally uplifting, as four exceptional young women reveal their dedication to Mercy Ministries of America, a nonprofit nationwide outreach program providing homes for unwed mothers. Denise, Heather, Terry, and Shelley also offer the thoughtful fruits of their personal ministry in a lively question-and-answer format, responding to vital issues affecting so many Christians around the nation today. LIFE, LOVE, & OTHER MYSTERIES is unforgettable proof that their message is precious and unique - an invaluable testament to living every day in faith, hope, and love.

Point Of Grace, the multiple Dove Award–winning, Gold and Platinum-selling vocal group, has been sharing their faith through song for more thanten years. The popular group has twenty-one consecutive #1 hit singles and multiple Grammy nominations to its credit. Called the "hottest" group in Christian music by the New York Times Magazine, Point of Grace has influenced multiple thousands of teen girls through concert and tour performances.

Davin Seay is the coauthor of With God on Our Side and Al Green's memoir, Take Me to the River. His writing has appeared in the Los Angeles Times, The Philadelphia Inquirer, USA Today, and elsewhere. He lives in Los Angeles.
Loading...
or support indie stores by buying on