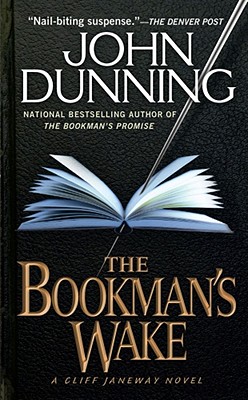 Denver cop-turned-bookdealer Cliff Janeway is lured by an enterprising fellow ex-policeman into going to Seattle to bring back a fugitive wanted for assault, burglary, and the possible theft of a priceless edition of Edgar Allan Poe's "The Raven." The bail jumper turns out to be a vulnerable young woman calling herself Eleanor Rigby, who is also a gifted book finder.
Janeway is intrigued by the woman -- and by the deadly history surrounding the rare volume. Hunted by people willing to kill for the antique tome, a terrified Eleanor escapes and disappears. To find her -- and save her -- Janeway must unravel the secrets of the book's past and its mysterious maker, for only then can he stop the hand of death from turning another page....

John Dunning has revealed some of book collecting’s most shocking secrets in his bestselling series of crime novels featuring Cliff Janeway: Booked to Die, which won the prestigious Nero Wolfe award; The Bookman’s Wake, a New York Times Notable Book; and the New York Times bestsellers The Bookman’s Promise, The Sign of the Book, and The Bookwoman’s Last Fling. He is also the author of the Edgar Award-nominated Deadline, The Holland Suggestions, and Two O’Clock, Eastern Wartime. An expert on rare and collectible books, he owned the Old Algonquin Bookstore in Denver for many years. He lives in Denver, Colorado. Visit OldAlgonquin.com.

Praise For The Bookman's Wake…

Boston Sunday Globe Magazine Not only kept me up far too late one night, but got me up two hours early the next morning.

Kirkus Reviews Mad, fantastical, and darkly original. Bookbinding has never been so compelling.