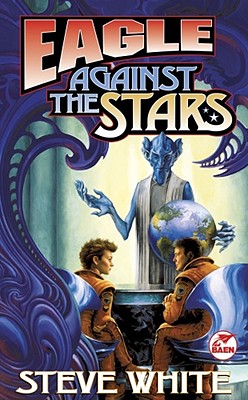 Eagle Against the Stars

When the Lokaron discovered Earth, they picked America to use as their puppet in dominating the planet. They weren't evil; they just insisted, backed up by irresistible weapons, that we trade with them. They played fair -- by their rules -- but if they didn't own something, it would mean they didn't want it. At first we tried to fight, but when the ones with the guns say "Let's trade " it means "Trade or bleed, " even if you eventually aren't going to have a country -- or a planet -- left. But worms turn, and like the Europeans a century ago, the Lokaron were going to learn a hard lesson from their victims....

Steve White completed a tour of duty in Vietnam as a Naval officer. His SF adventure trilogy for Baen comprising The Disinherited, Legacy, and Debt of Ages was highly successful, as was Prince of Sunset, and its sequel Emperor of Dawn. With David Weber, he has collaborated on Insurrection, Crusade, In Death Ground, and The Shiva Option
Loading...
or support indie stores by buying on
(This book is on backorder)