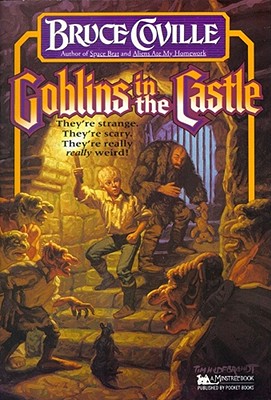 Goblins in the Castle (Paperback)

Discover this “shivery treat” (Booklist), a funny, fantastical adventure from the bestselling author of My Teacher Is an Alien and the upcoming Diary of a Mad Brownie.

Toad-in-a-Cage Castle was filled with secrets. Secrets such as the hidden passages that led to every room, the long stairway that wound down to the dungeon, and the weird creature named Igor who lived there. But it was the mysterious night noises that bothered William the most—the strange moans that drifted through the halls of the castle where he was raised. He wanted to know what caused them.

Then one night, he found out…

Katherine Coville is an artist, a sculptor, and a dollmaker who specializes in highly detailed images of creatures never before seen in this world. She has illustrated several books written by her husband, Bruce Coville, including Goblins in the Castle, Aliens Ate My Homework, and the Space Brat series. Bruce and Katherine live in Syracuse, New York, with a varying assortment of pets and children.

Praise For Goblins in the Castle…

ALA Booklist A shivery treat for readers, who will identify with the stalwart William as he ferrets out the castle's scary secrets and rights a long-existing wrong.
or support indie stores by buying on
Copyright © 2020 American Booksellers Association